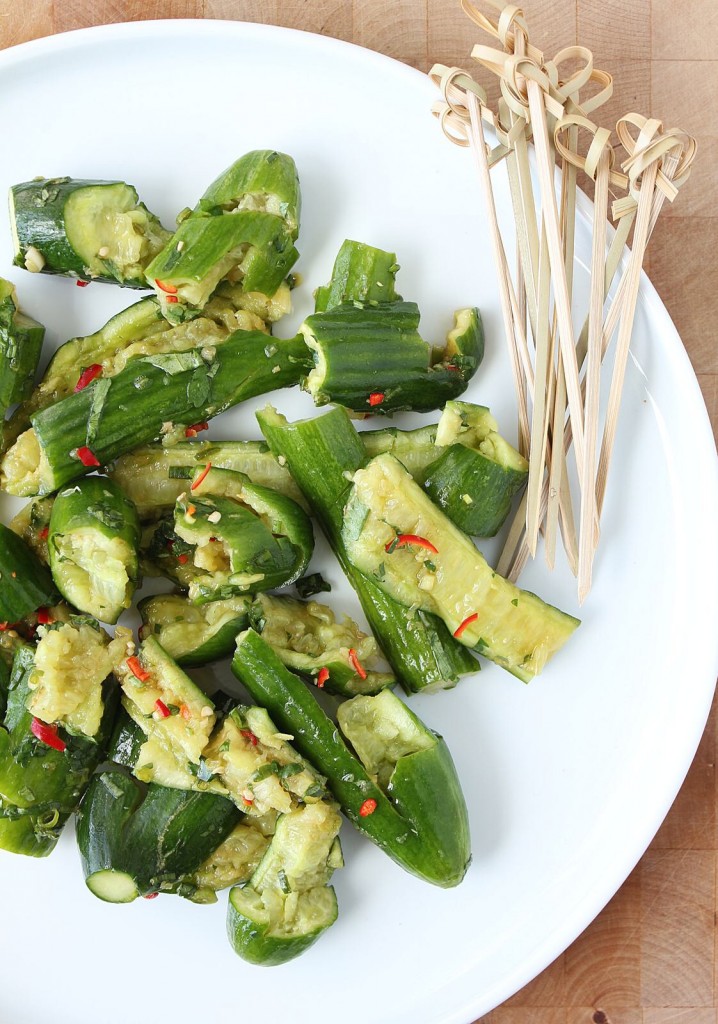 These cucumbers have been following me. A friend of mine posted a version on Instagram, which started my internal obsession, while another friend has been giving me the weekly heads up about mini cukes at our local Farmer’s market. I guess we all need some cooling down (one of cucumber’s finer talents). 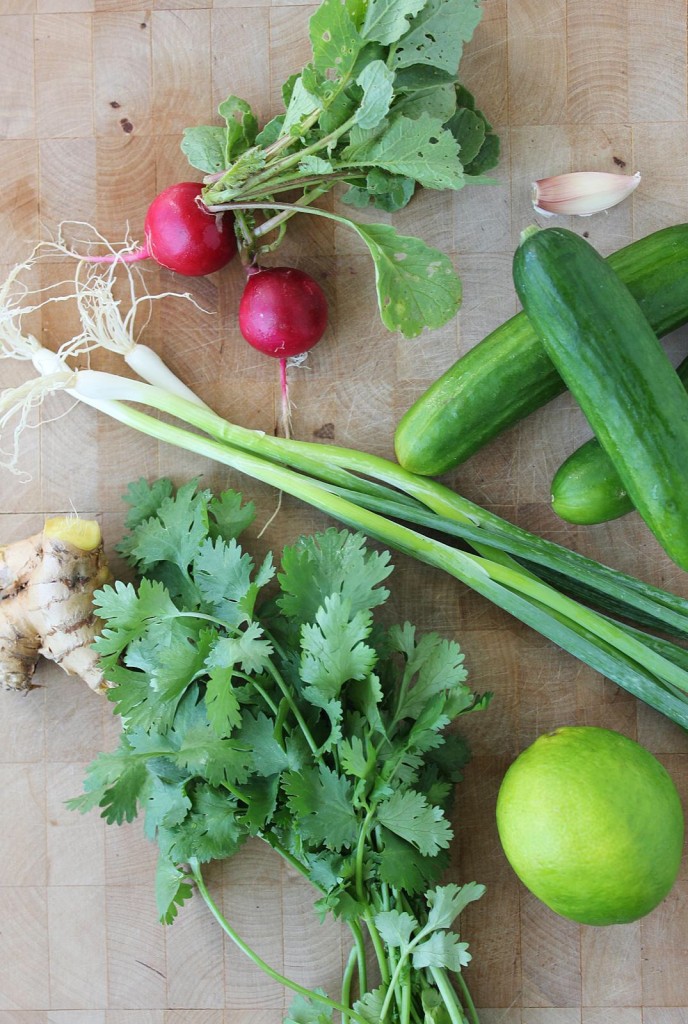 One of my fave foodie mags, Bon Appétit is also on the cucumber train. They had a version of these cucumbers in a recent issue that caught my eye and got me excited. I love it when people are bold enough to colour outside the lines and throw caution to the wind (even if it’s in a safe, food-related way). Any time you can trade in fancy knife skills for the side of your rolling pin and call it fancy, I am SO in. 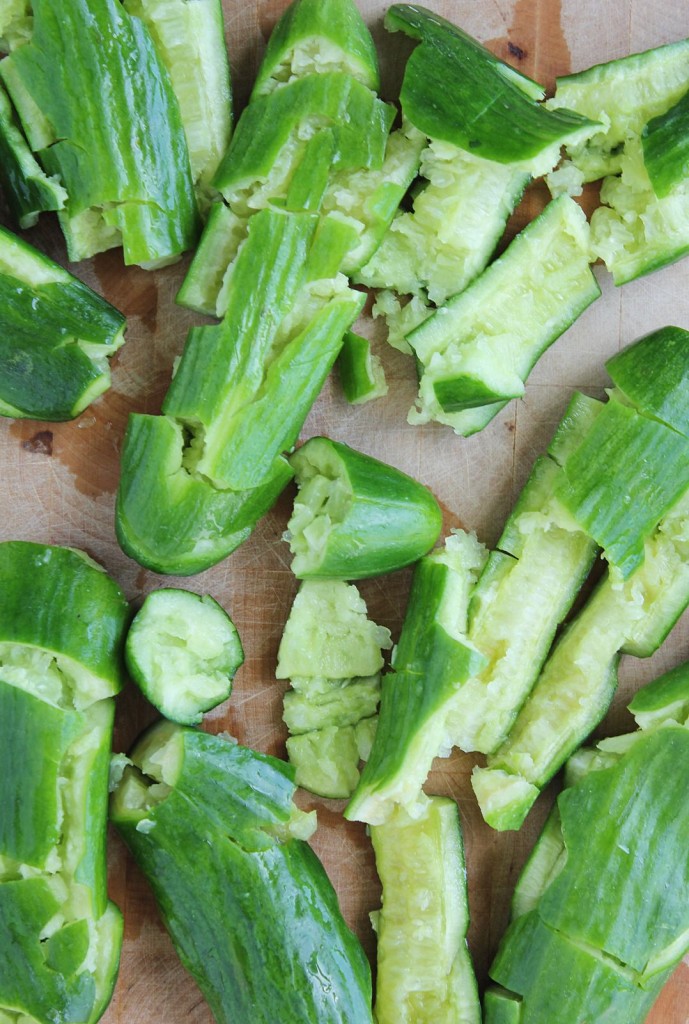 Instead of chopping and de-seeding the cucumbers, manipulating them into even, bite-sized pieces, you put on a shirt that you don’t have strong feelings for, lay the cucumbers out on your most heavy duty cutting board, find your wooden rolling pin (or muddler, mallet etc), think about all of the stuff that’s pissing you off and pound the cr@p out of your cucumbers. Who cares that this will actually bring more fresh cucumber flavour out, or that you are creating more craggy crevices for some delicious marinade to live, you are going to feel SO good. You may even make mental plans to plant cucumbers in you garden next year. 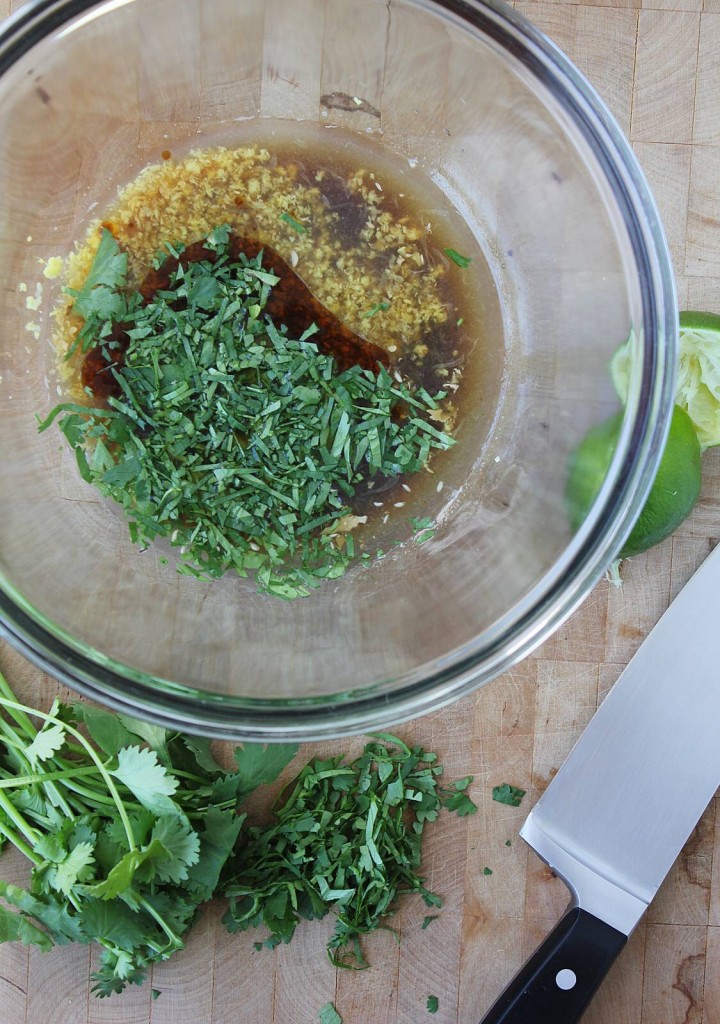 A little bit of lime (or lemon) juice and sea salt added to these smashed cucumbers will taste great, especially with a chilled kombucha at happy hour. Toss some chilis in there too if you like it spicy and serve them on a dish with some toothpicks. So simple and so perfect for a mid-summer snack. 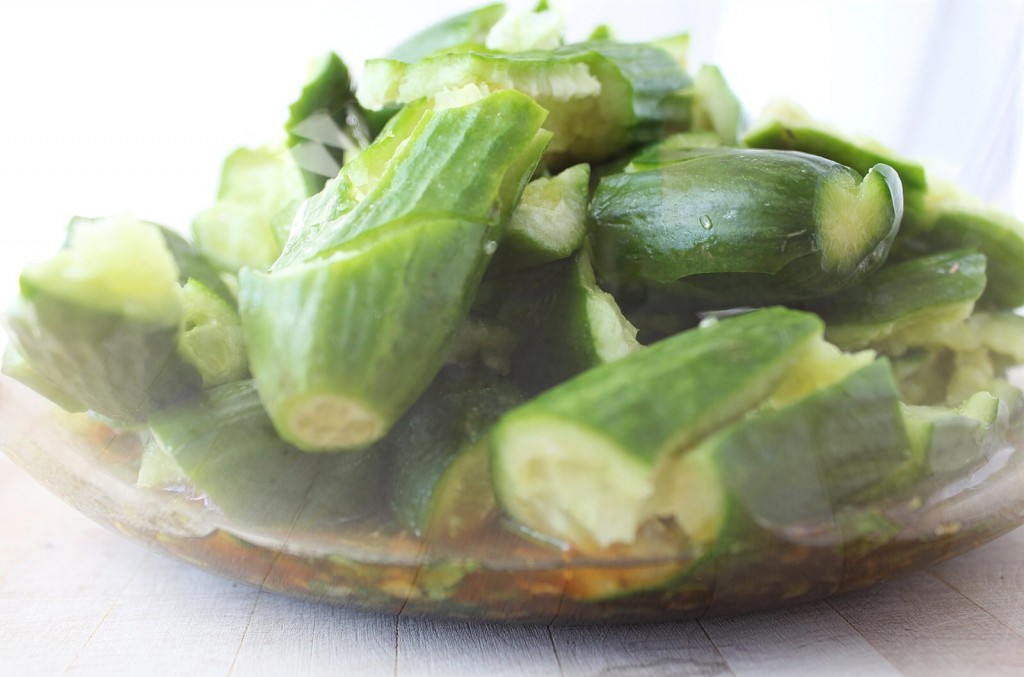 I like to look at these cukes as an opportunity for other flavours though too, and more cancer-fighting energy. Ginger and garlic are good buddies (and immune-boosting, anti-inflammatory geniuses) and they love crawling into all of those new crevices in the smashed cukes. Green onions and cilantro add some green flavour and the cilantro offers some light blood-cleaning, to vacuum up any stray heavy metals (thanks cilantro, you’re so cool). Tamari for some fermentation benefits and umami flavour makes a delicious swap for sea salt.

I don’t use a lot of refined oils in general, but decadent toasted sesame oil in small amounts adds a rich, toasty flavour that is really nice for a change. It is optional, and if you start making these every day (because you’re obsessed like me), just add the oil once in a while for a treat.
I have used mini cucumbers for this because they have less of a watery interior, so I find you get more bang for your buck. If you can only find the big guys, you might want to remove some (not all) of the seeds (pre-smashing) so that they don’t release too much water, watering down the flavour of the marinade. Don’t throw the seeds out though, put them in your water, or just eat them as a pre-snack snack. 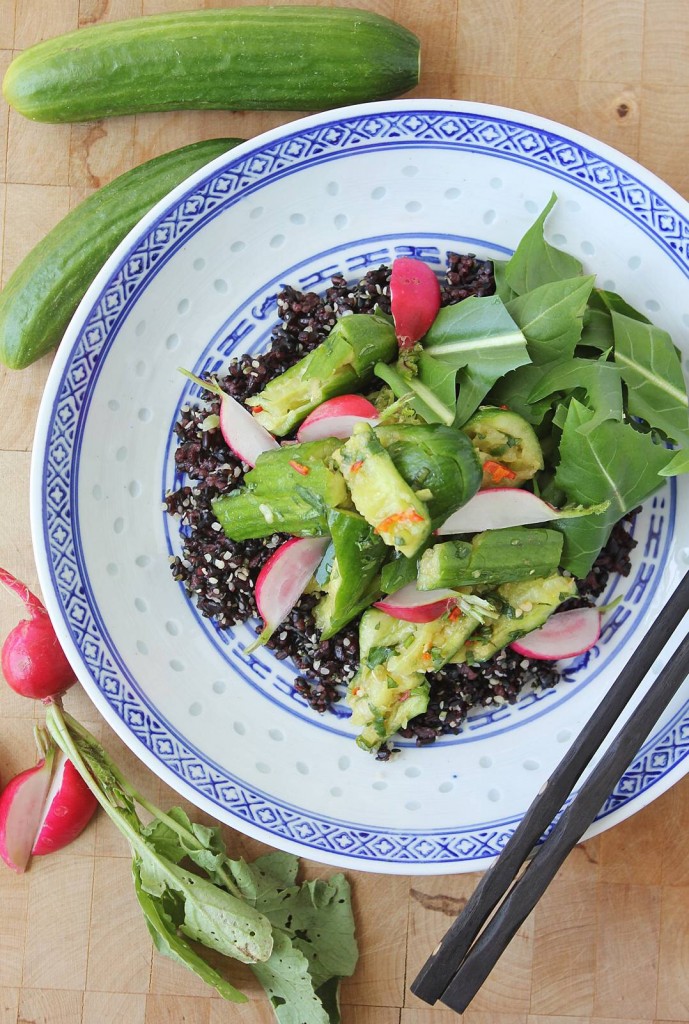 Be sure that your cucumbers are organic or un-sprayed. If you’re at the Farmer’s market ask the Farmer, if you’re at the grocery store, check the labels. If organic/unsprayed cucumbers aren’t available, peel the skin off using a peeler (pre-smash). Don’t worry, you will still be getting some green from the cilantro and green onion. Be careful smashing once they are peeled, they’ll be a little more slippery. 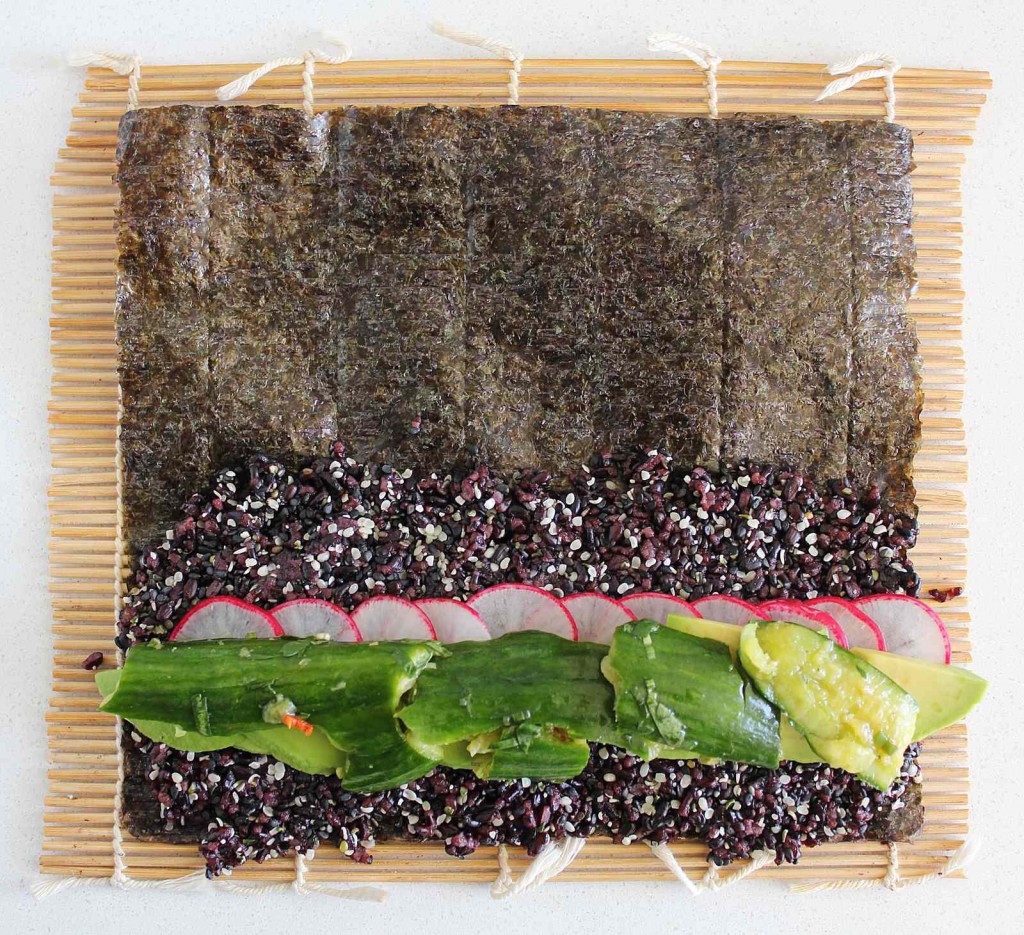 These look the best when you serve them right away, but they get all pickley and saturated overnight as the water draws out and the cucumbers change colour. The extra liquid along with your briefly pickled cukes will taste incredible on a bowl of black rice or quinoa with some other fresh veg, or in a casual, imperfect sushi roll. 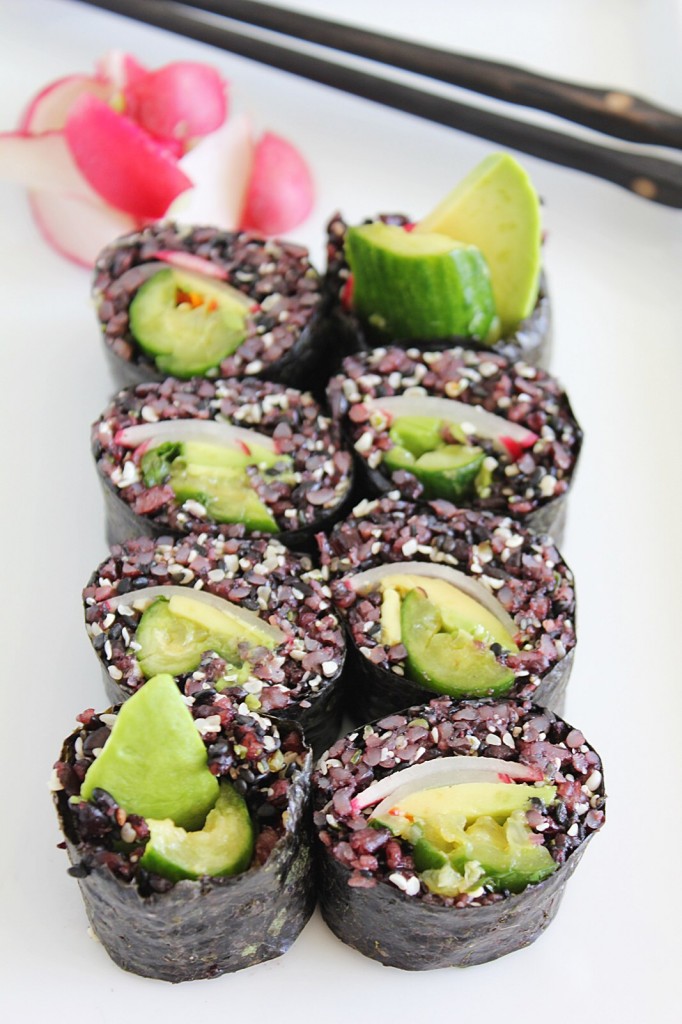