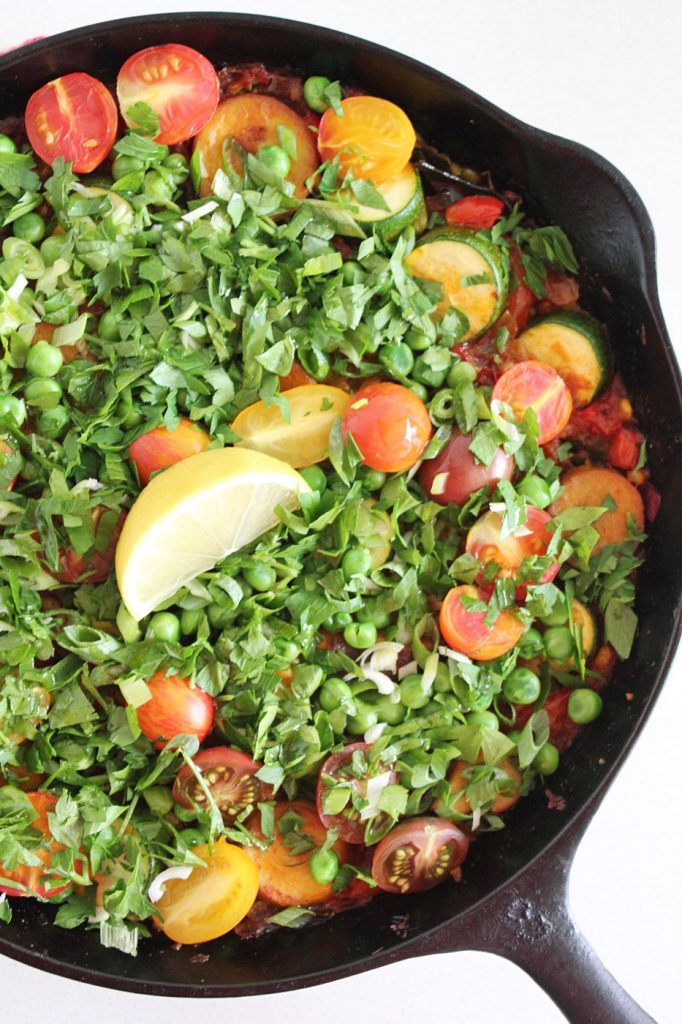 I listened to a podcast recently, a recording of a Lucky Peach event called ‘Eating Out Loud’. Just like the magazine, it was creative, hysterically funny, artistic, irreverent and at times, totally bizarre. Different people spoke/sang/told stories, including Chef David Chang, one of the founders of the magazine (and of Momofuku Restaurant Group and other awesome foodie things). 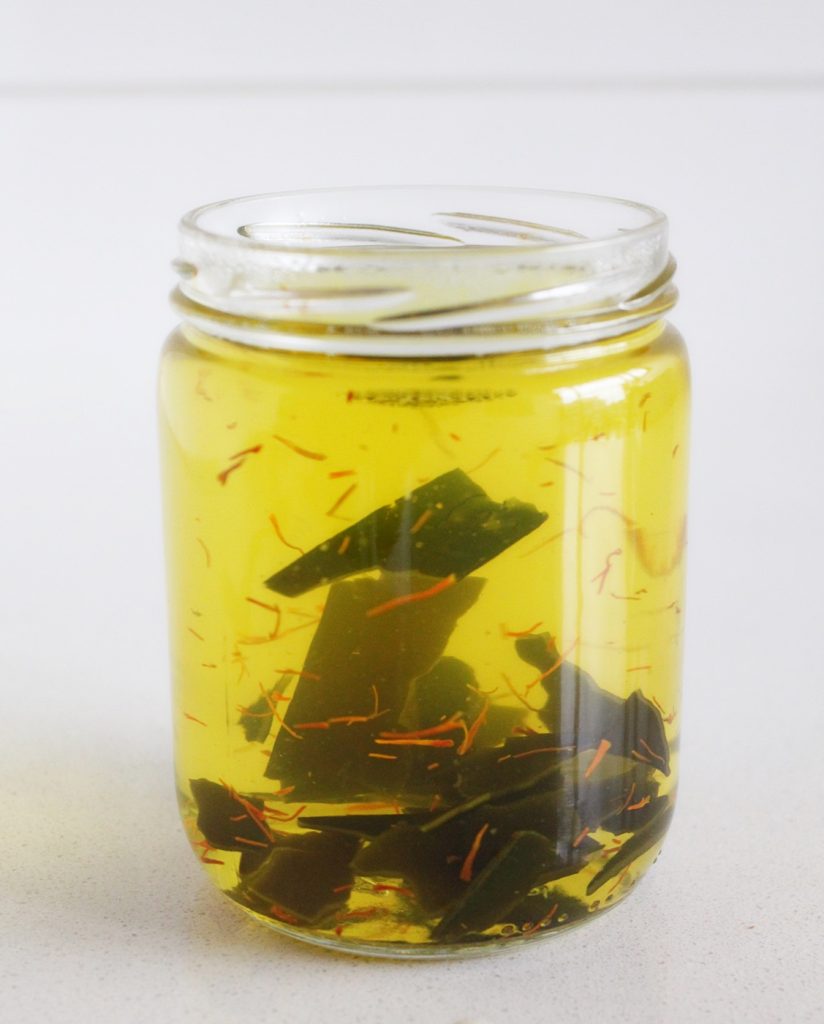 I love him. I loved watching him on Mind of a Chef, I love his passionate but self-deprecating articles in Lucky Peach, I’m totally a fan. Which is why in this podcast, when he referred to paella as ‘the most overrated food in the history of the world’ I had to do the 15 second rewind to make sure I had heard him correctly. It’s not like I share his food philosophy in general, but this still surprised me. Paella?! 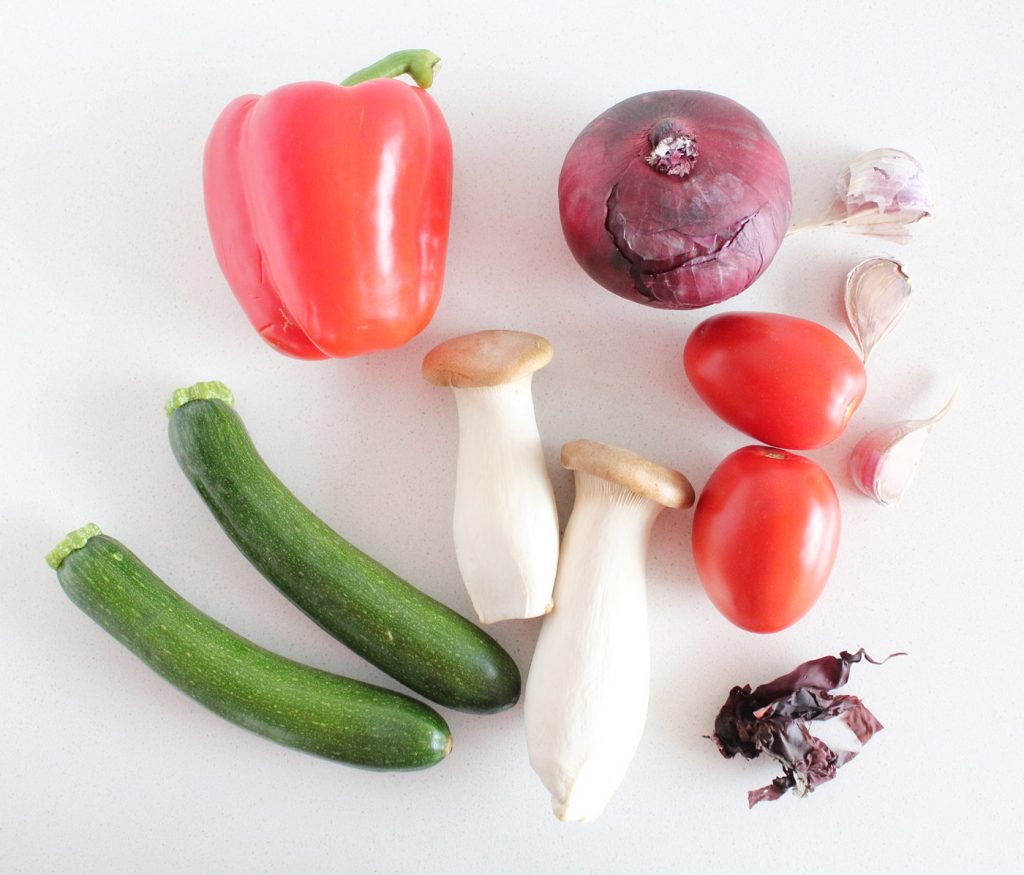 Paella is easy but interesting, electric but still sort of peasant food. If you’ve ever spent time in Spain, you’re probably familiar with the giant, flat paella pans simmering away at the entrance to the restaurants, with enough paella for the entire restaurant’s guests plus staff, while the saffron-rich aroma wafts through the narrow streets. It tastes like dinner at midnight, stern-faced flamenco dancers and the heady aroma of orange blossoms brought to life by the still intense evening heat. Paella is all of the good things. 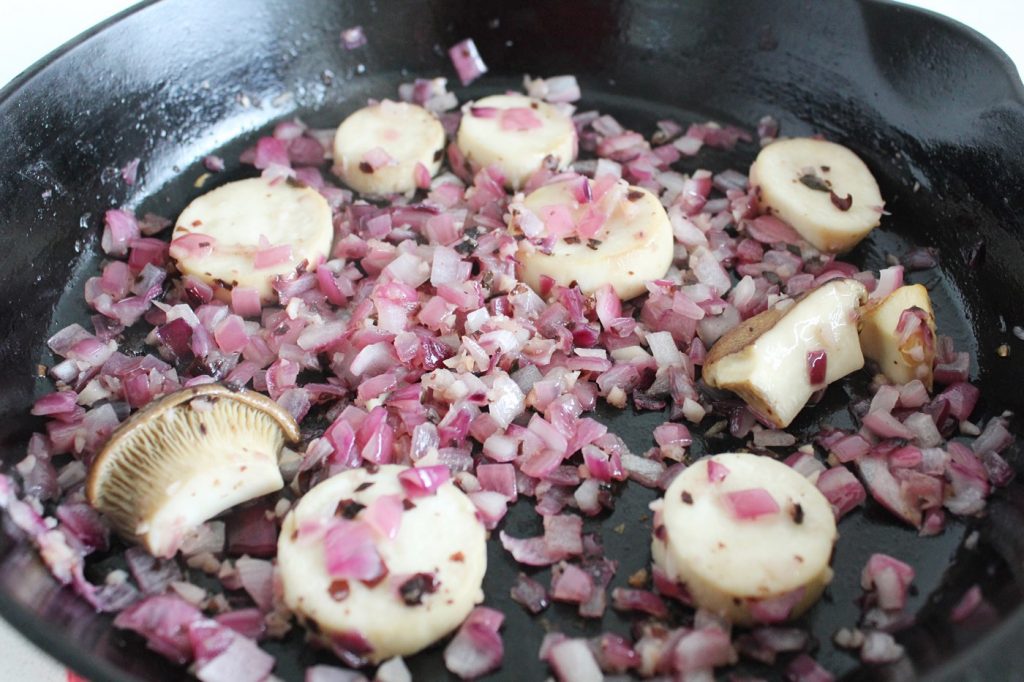 Thanks to David Chang, I haven’t stopped thinking about Paella for a good 3 weeks. I’ve let go of the fact that he’s not into it (like all good art, a divided audience is a good sign) and focused on how to keep the essence of this dish alive while giving it some cancer-crushing muscle for you guys. 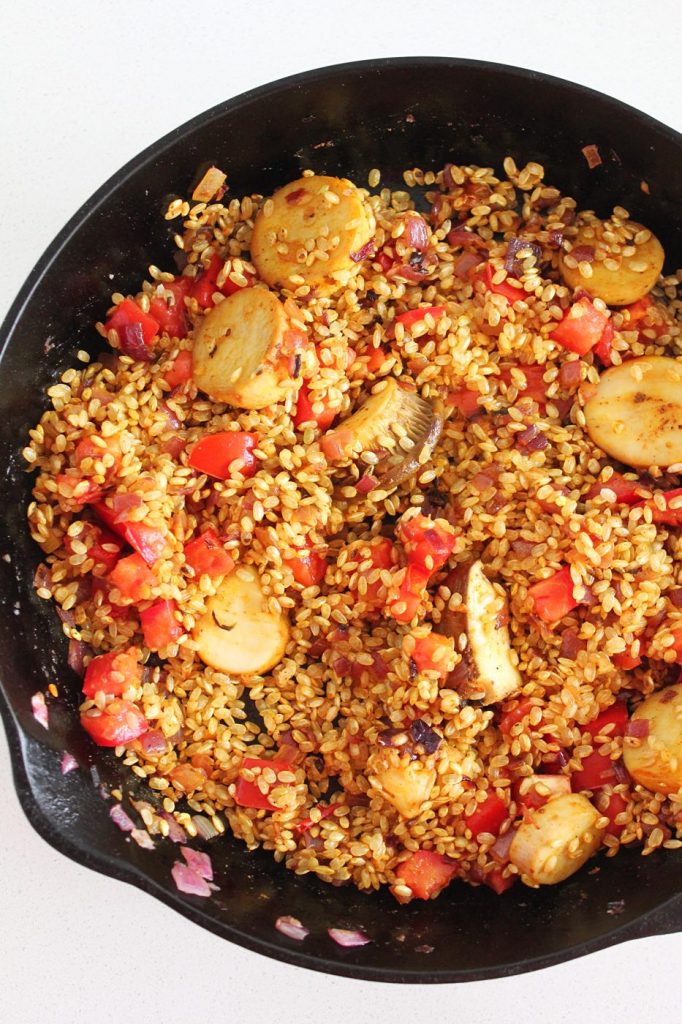 The first thing we did was make our own stock, which is more of a tea, out of kombu and saffron. This gives it lots of minerals as well as an undertone of umami and sea flavour that would traditionally have come from chicken stock, shellfish and other seafood. We added dulse seaweed into the aromatics for the same reason. The saffron is really important to give this dish an authentic taste but is also a potent anti-inflammatory. It is expensive but a little bit goes a long way (check Costco, they sometimes carry it at an affordable price). We also use it in this deeply worthwhile recipe, in case you’re afraid you’ll never use it again. 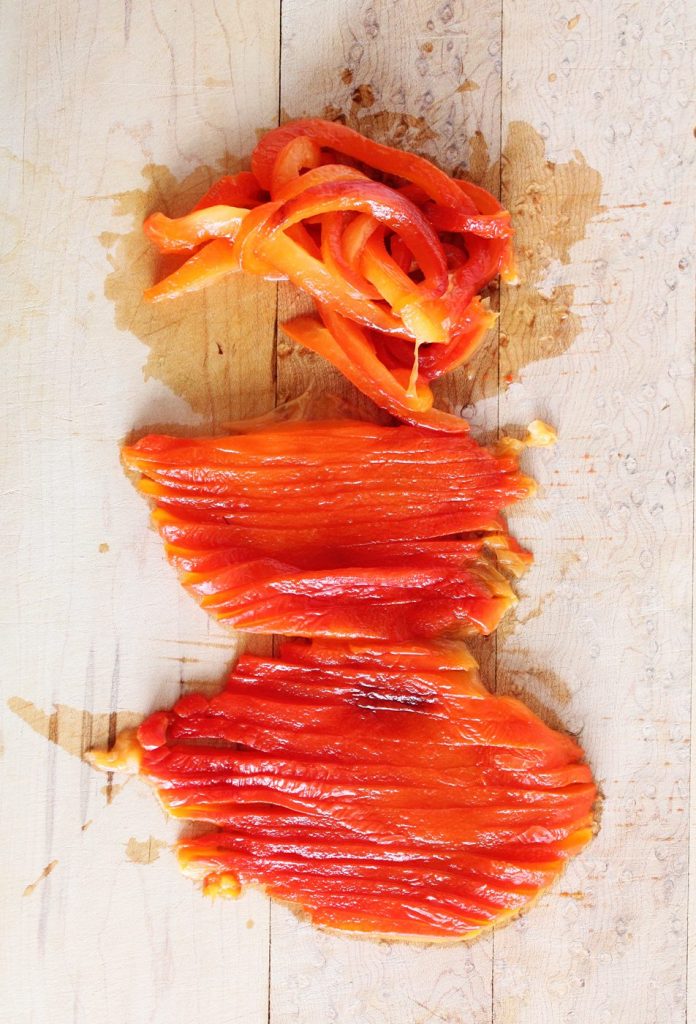 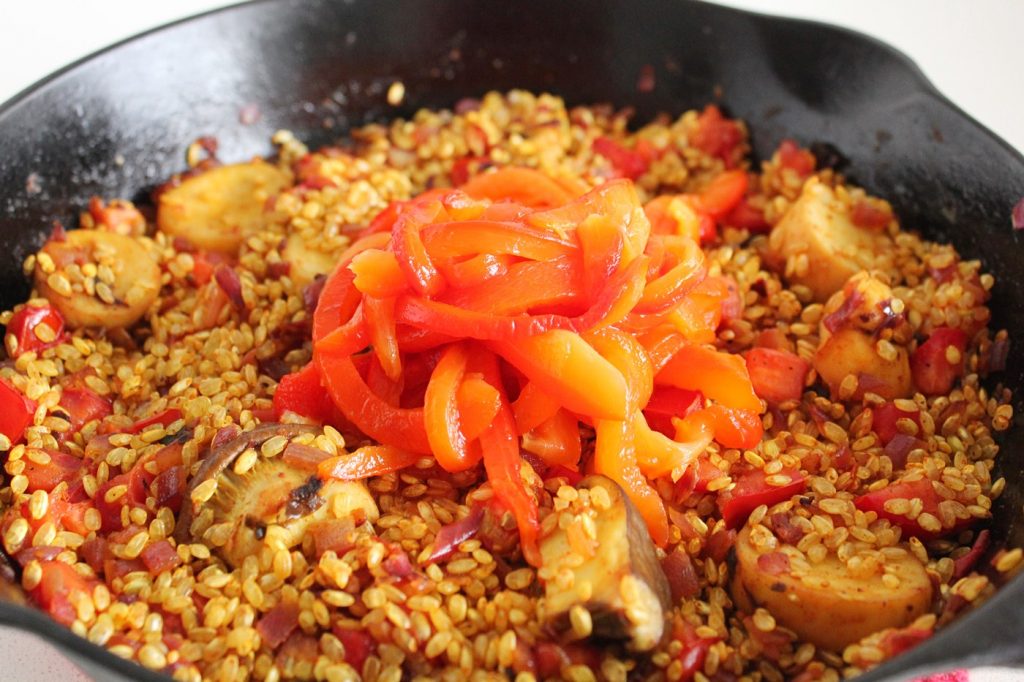 The smoked paprika is something that we use sparingly, but in this case it gives the illusion of the rich flavour that big hunks of chorizo would traditionally add. And the turmeric, once we’ve added the smoked paprika, tends to slide in under the radar flavour-wise, while still adding its anti-inflammatory powers. 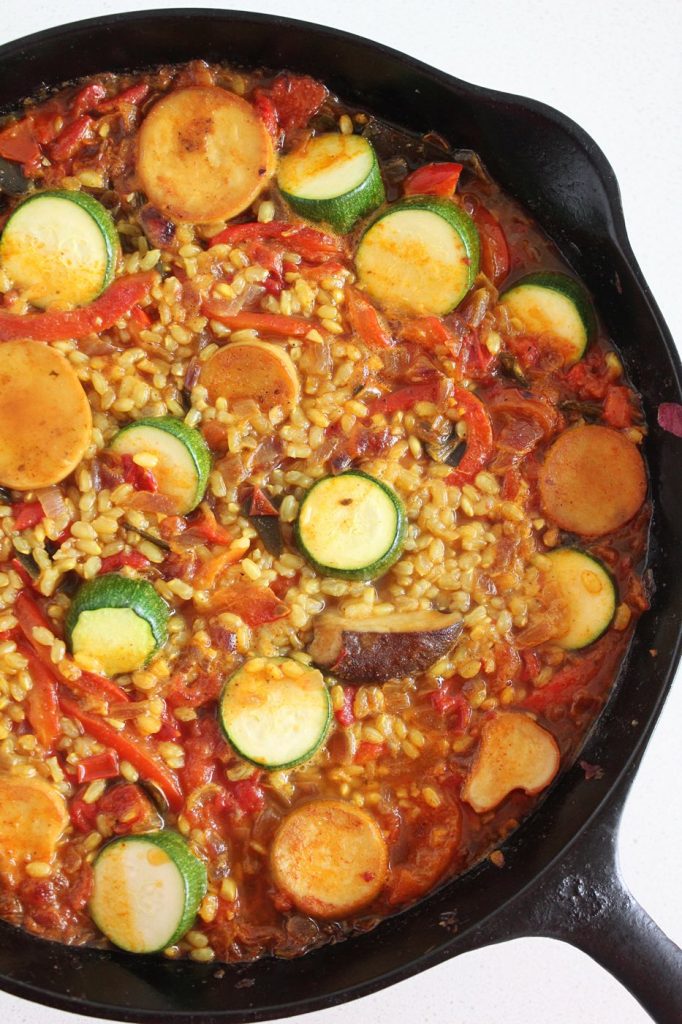 Then there are the veggies. Onions and garlic are necessary for flavour, and the tomato and roasted pepper are also traditional, but you could add artichoke hearts, fennel slices, cauliflower florets, rounds of leek, really anything that you feel like or have on hand in place of the zucchini and king oyster mushrooms (that we chose because once sliced up, they sort of look like scallops). 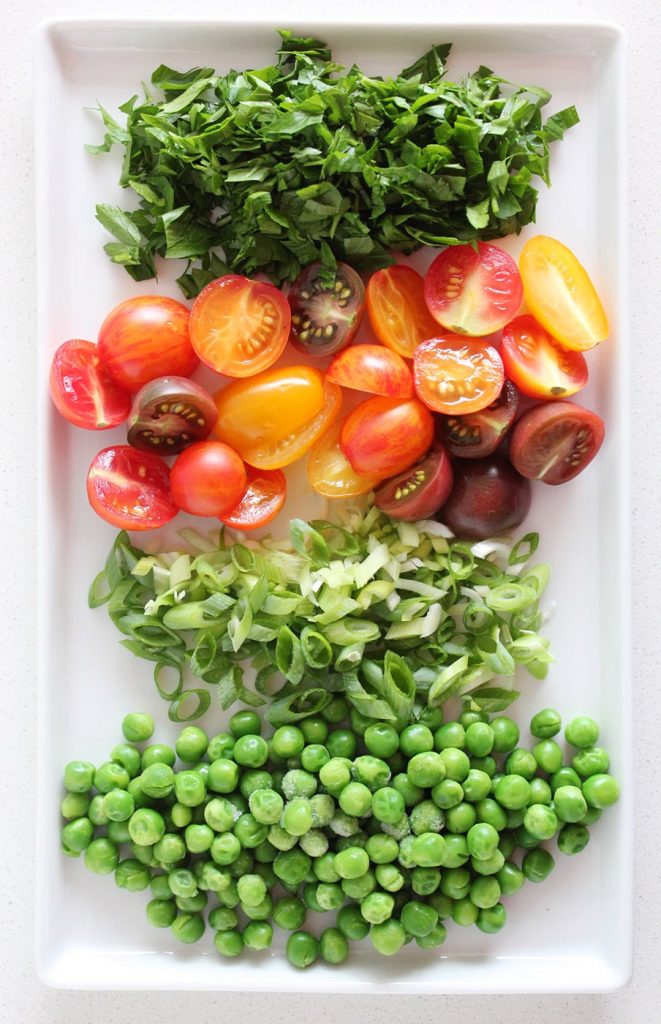 We stuck with rice as the grain, but went with short grain brown rice (instead of white) and soaked it overnight to make it easier to digest. The amount of liquid used in the recipe will change if you don’t soak it, or if you use a different type of rice. 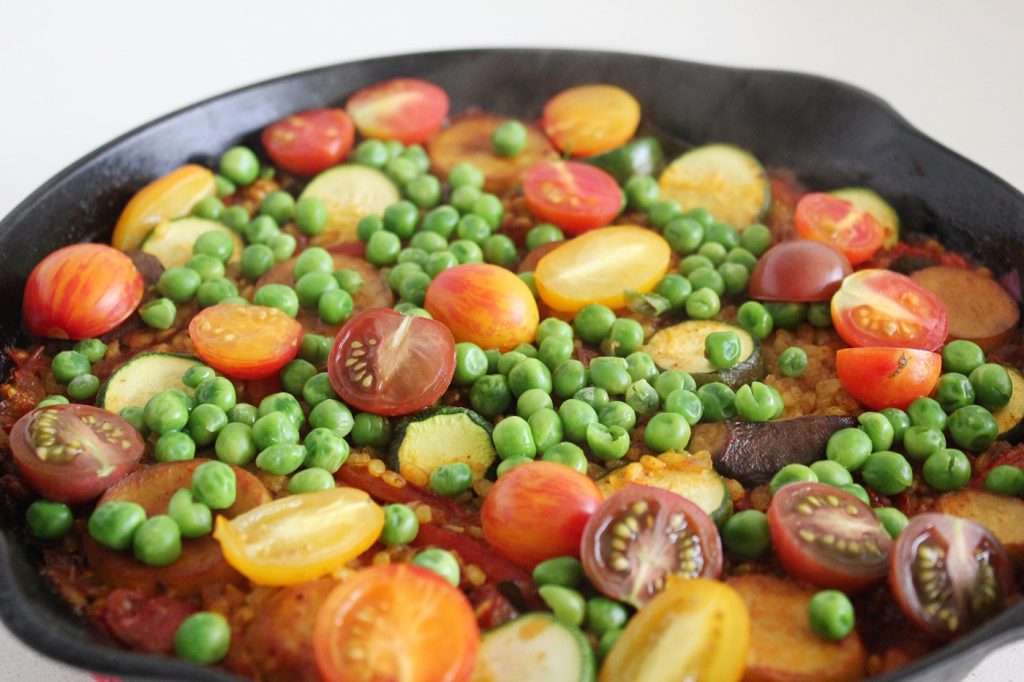 This paella isn’t traditional for most of the reasons above, but there are still flamenco stomps in there, and the veggies make it far more exciting if you ask me. It will make your kitchen smell like Spain (and 10 o’clock bedtimes instead of 4am, and water and vitamins instead of red wine can’t change that). 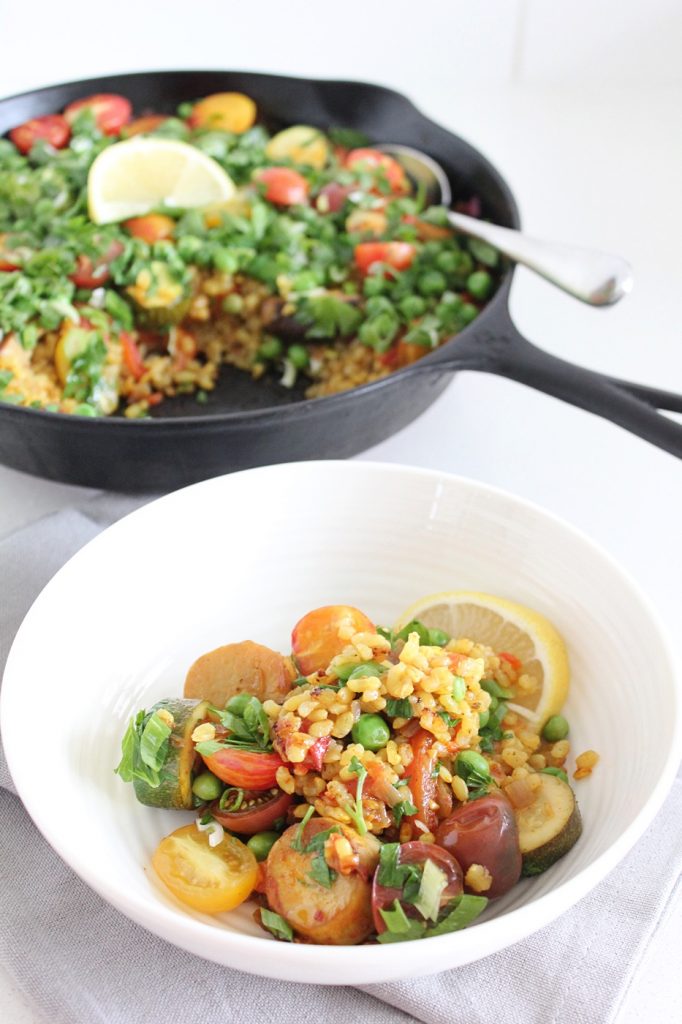