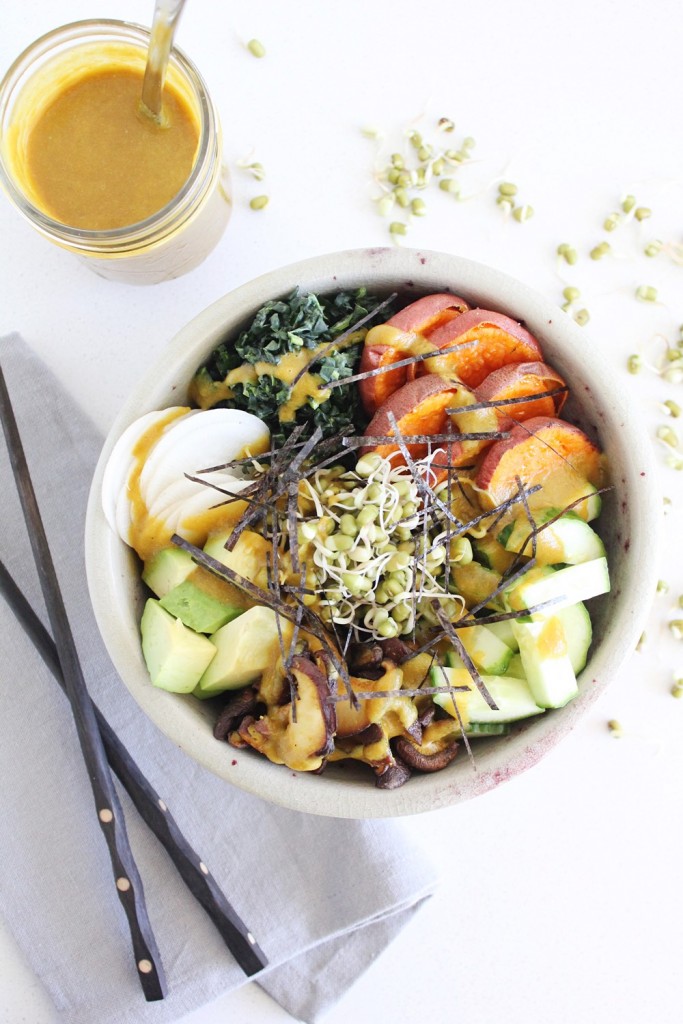 This is the donburi I wish I could order in a Japanese restaurant. Sushi, at least in Vancouver, no longer means you have to order all you can eat farmed salmon and mercury-heavy tuna rolls (thank goodness). There are plenty of veg options (that contain actual vegetables) but the surprise tempura batter and probable GMO soy sauce still forces (inspires?) the re-creation of wistful dream orders at home (eg -our recipe for sugar-free Kale Gomae). 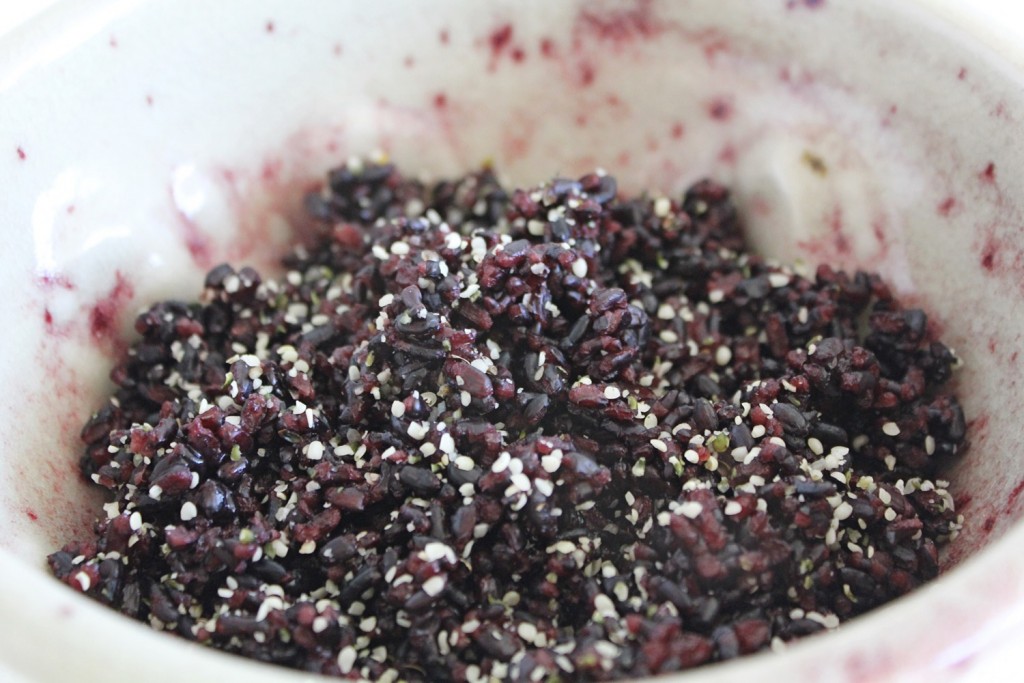 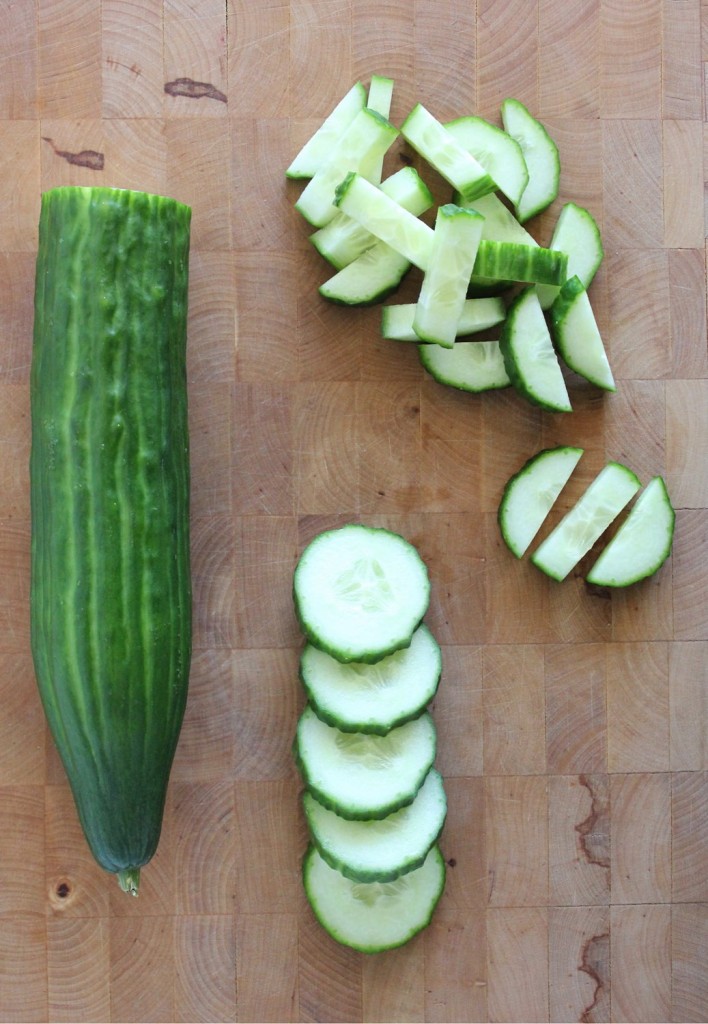 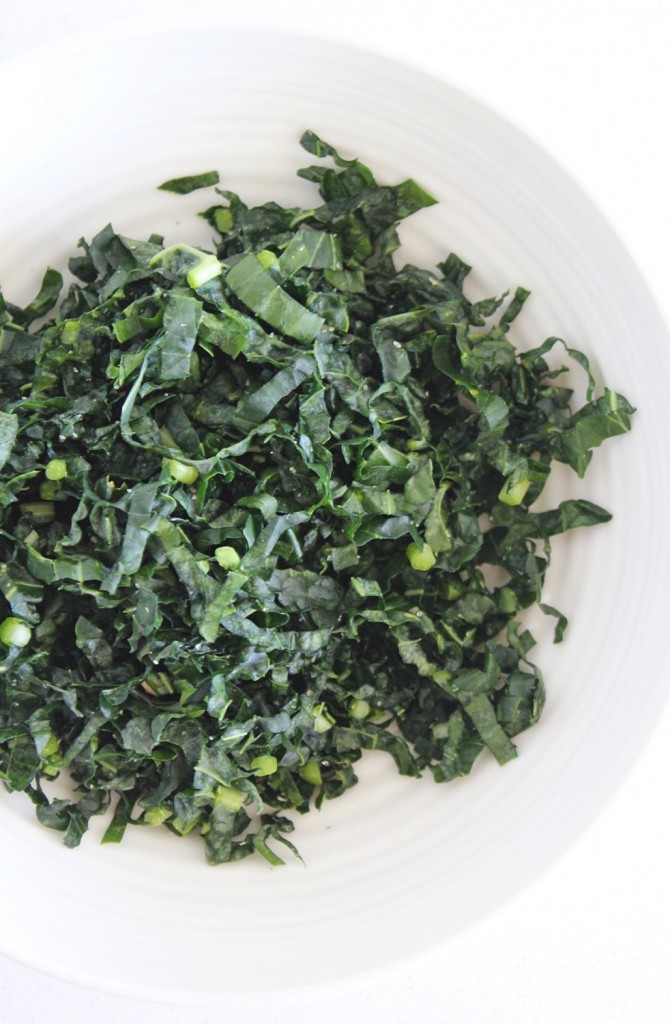 I really do love rice (in all styles of food) but if you are eating gluten-free, you may notice that your rice consumption goes up and requires some balance. Buckwheat and quinoa work well in its place in this dish (and offer different nutritional stats), or, if you want to keep the rice for a more authentic Japanese flavour, try a black ‘forbidden’ rice (that’s what we used), or other pigment-rich rice. This will mean that you are getting all of the nutrients that come with that deep purple colour. 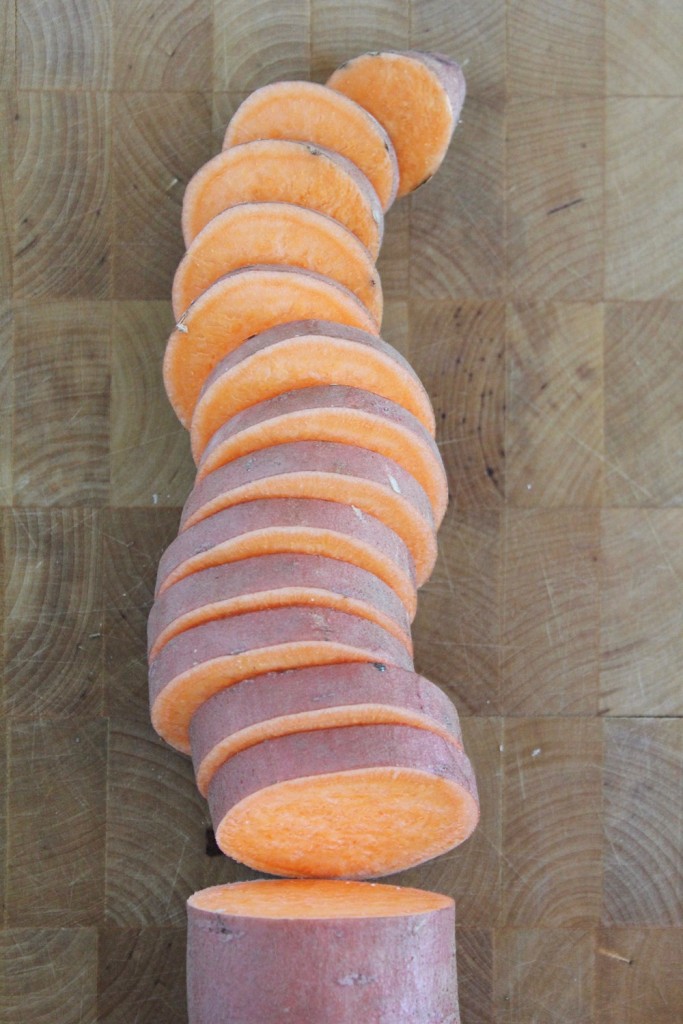 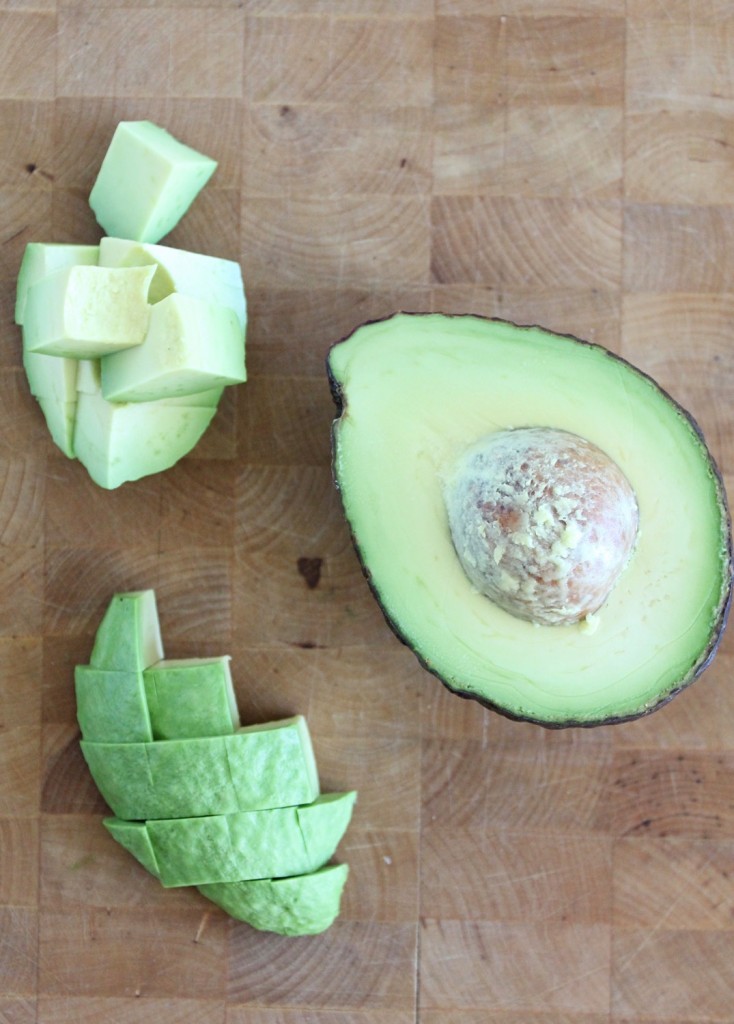 We also toss some hemp hearts into the rice once it’s cooked. I tend to do this with most cooked grains, hemp is earthy-tasting like whole grains, so you don’t really taste it, and it adds more healthy fats and fiber, both of which help to slow the absorption of sugar into your blood stream (essentially, it lowers the glycemic load of the grain -cancer cells hate this, so we love it). The texture is also really nice. Raw black or white, un-hulled sesame seeds would work well for this too (or both!). 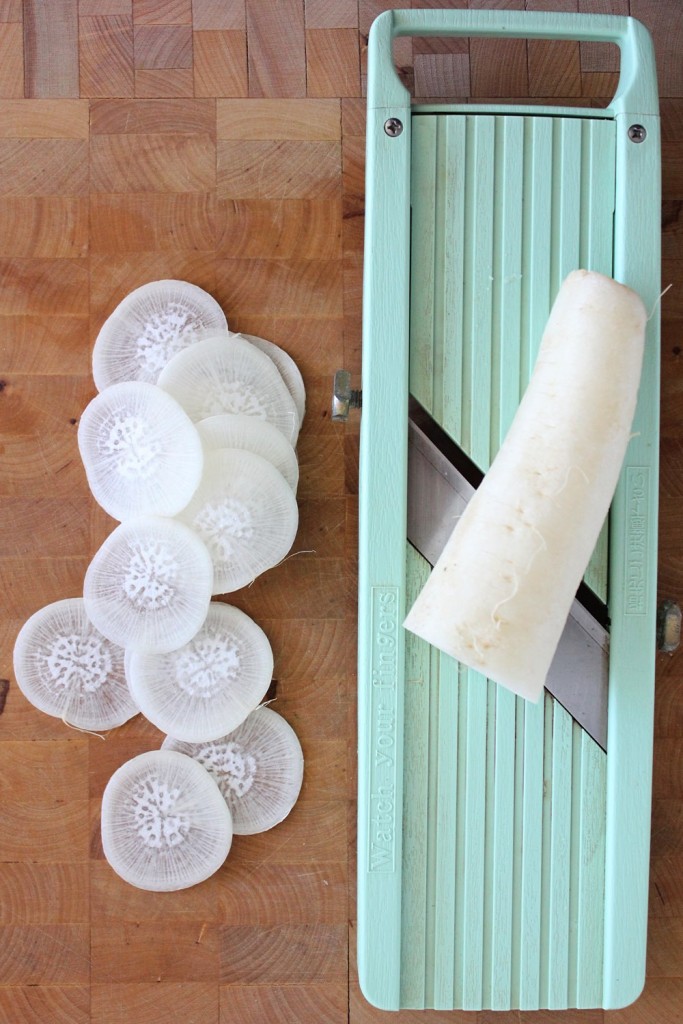 For the most part, I chose veggies that I have seen in sushi recently, to keep on theme, but almost any vegetable would work well in this. I have never seen it, but would totally order broccoli sushi, wouldn’t you? Broccoli would go well in this bowl, in fact so would most cruciferous veg (cabbage, bok choy, kohlrabi). 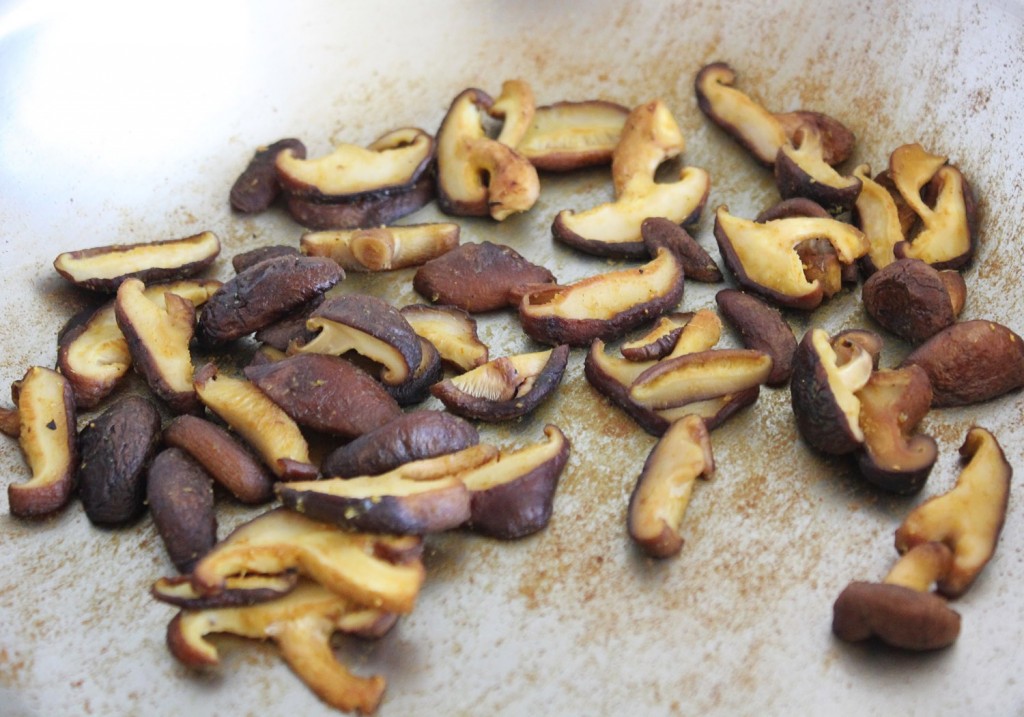 I did add some kale, which is a little bit less common, and mung bean sprouts, but fresh broccoli or mustard sprouts would be really nice too. 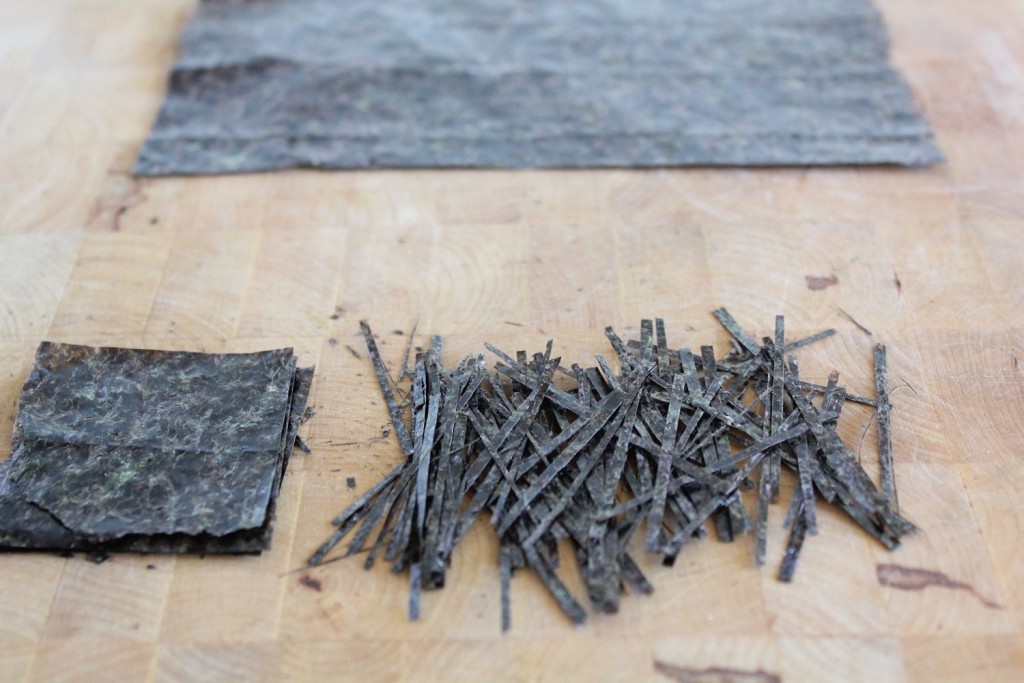 If you’re feeling ambitious, you could dust off your sushi rolling mat and take this from bowl status to roll status. It’s not very often I do this for myself, but every time I do it for a client, I think about how easy it was and that I should do it more often (but then don’t, obviously). Thinly sliced nori seaweed sprinkled over the top makes up for this blip of laziness by giving the bowl its signature sushi flavour. 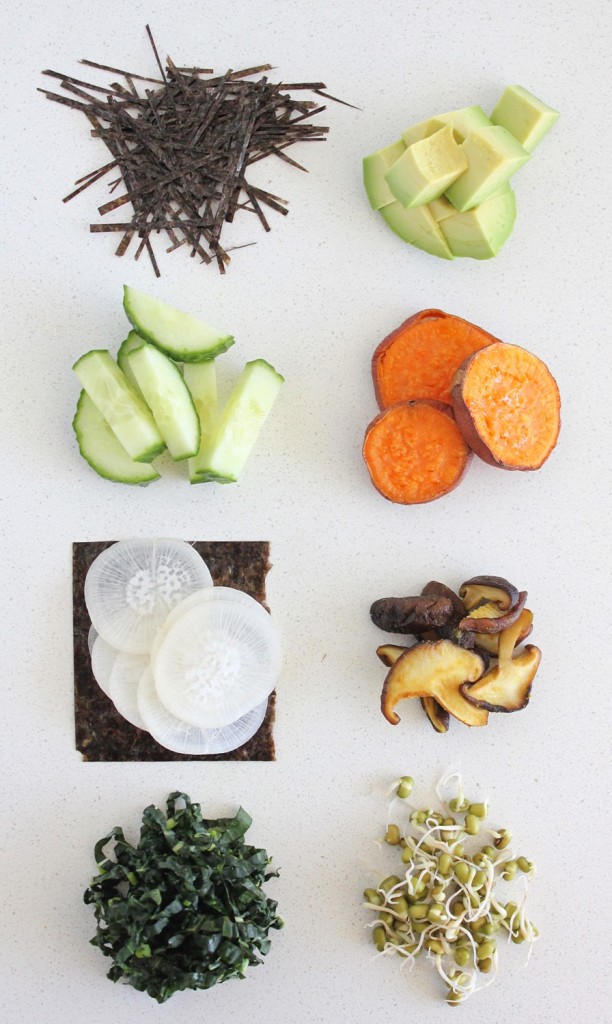 The sauce rounds everything out flavour-wise and contains some nice whole-food nutrition powerhouses (turmeric, garlic, ginger) and fresh apple instead of sugar. It would also be really good as a salad dressing, salad roll dip, marinade, and we actually add it to the shitakes at the end of the cooking process too. You could also blend some tamari with fresh horseradish (or wasabi) instead, for a truer sushi experience. 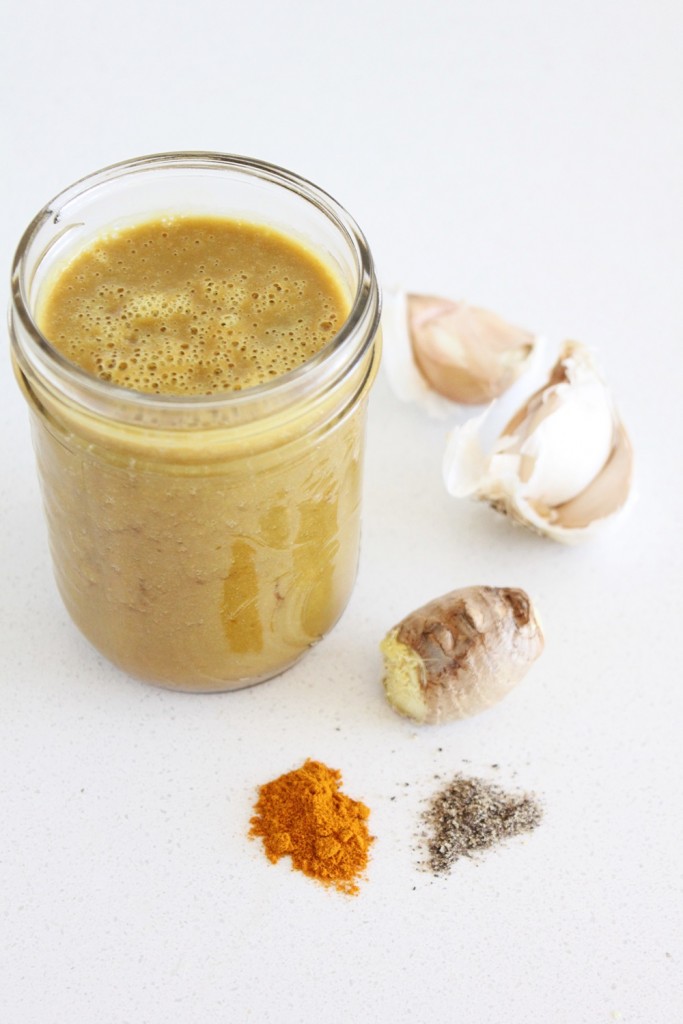 Guess what else is good? Replacing the bowl with a collard wrap and turning this into a green Japanese burrito. Too much of a stretch for you? Try it on day two with the leftovers (also, make enough for leftovers!) 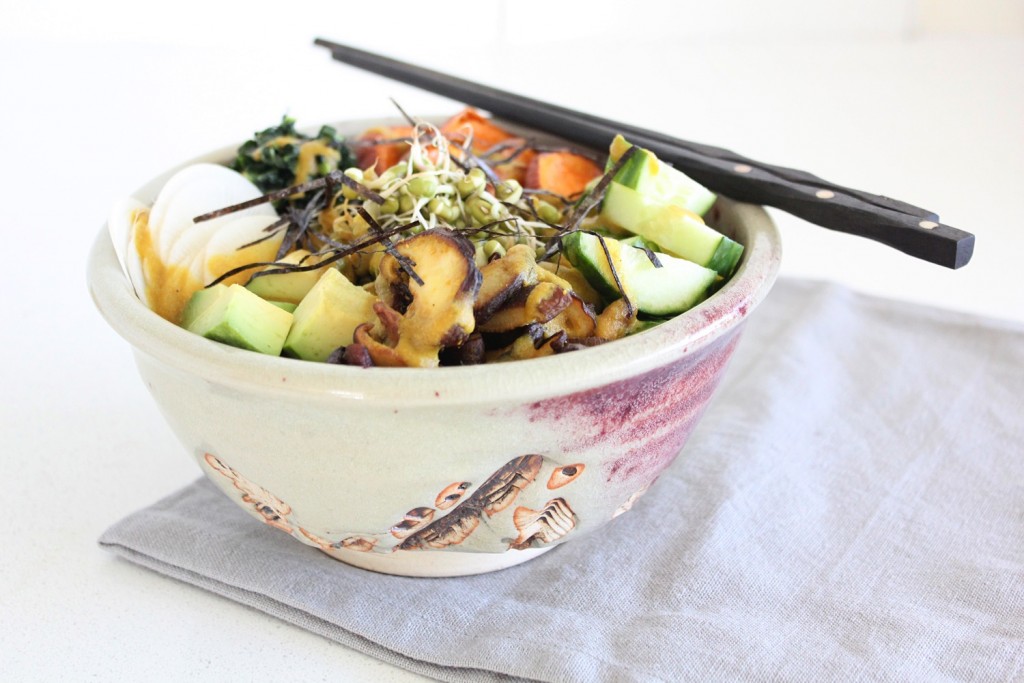