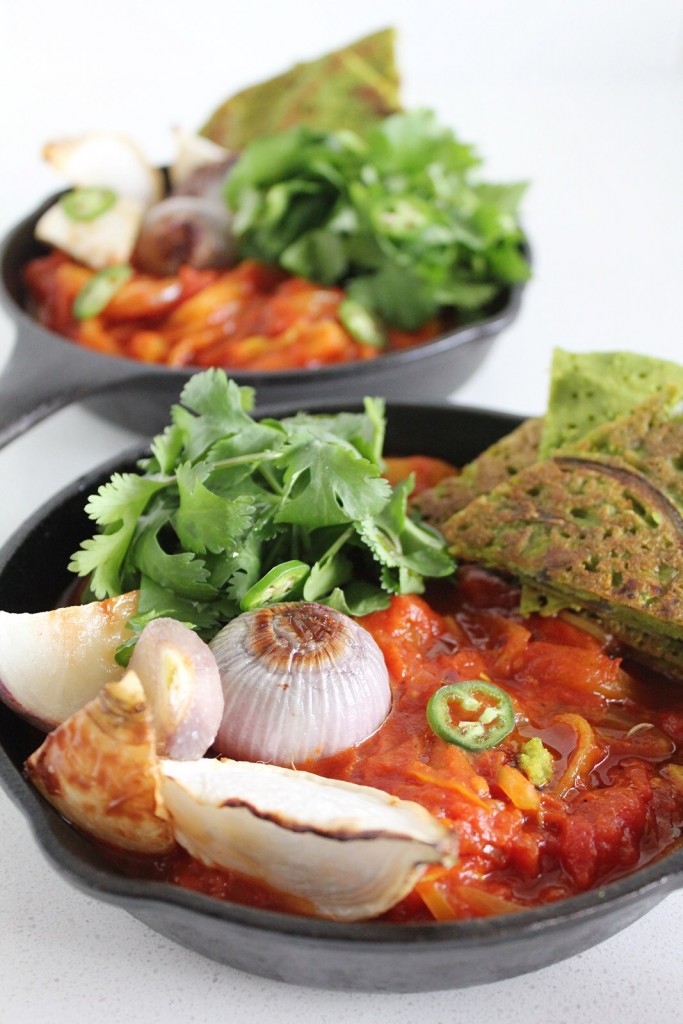 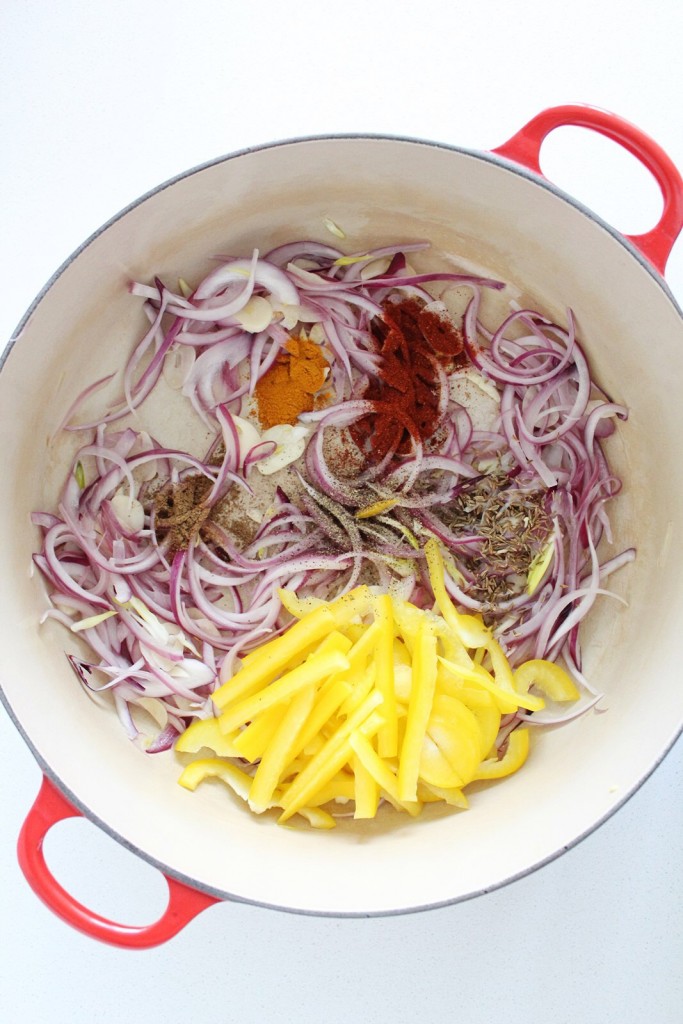 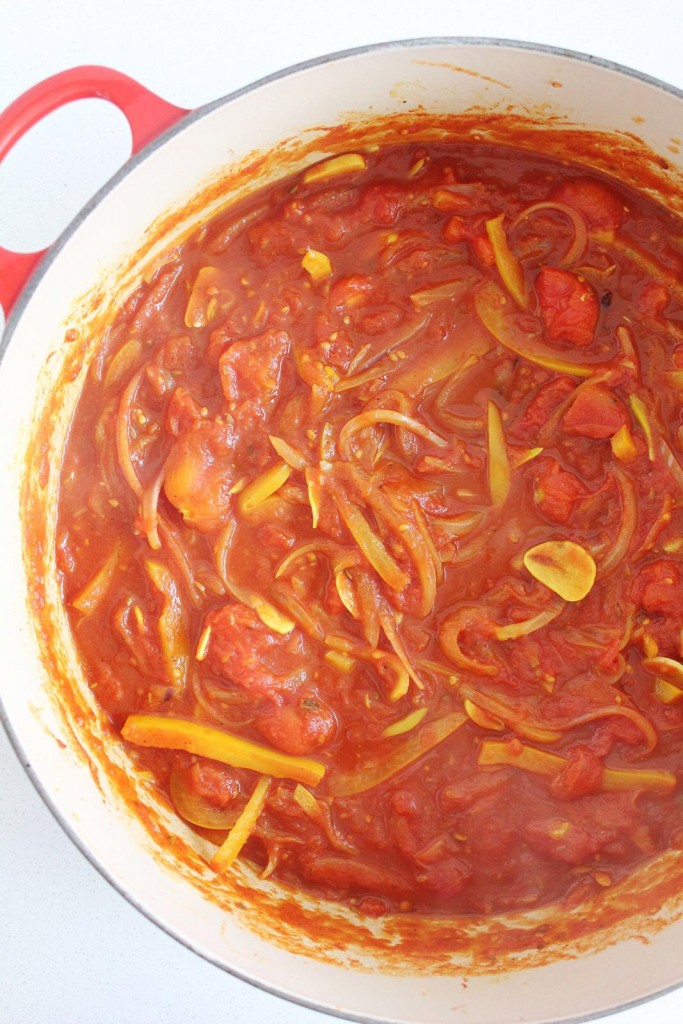 You know something really tastes good when you aren’t that hungry and you still notice how delicious it is (and it’s not chocolate). I actually had to stop talking (and working) and sort of hid myself so that nobody noticed, in order to thoroughly enjoy all of the cumin smokiness mixed with the sweet peppers and kidney beans. SO GOOD! I could barely move I was so full, but I still got through class ok and was still thinking about second dinner shakshuka the next morning. 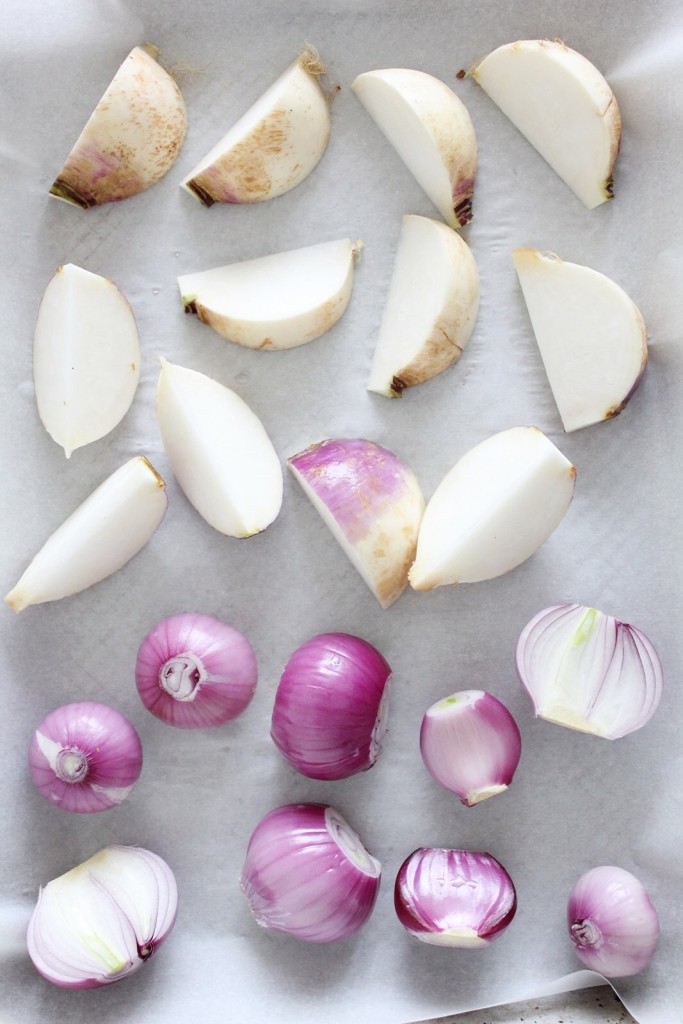 I clearly needed some more (you do too, trust me), which leads us to this post. You’ll usually find shakshuka with eggs baked into it, but it is super easy to make at home without the eggs and maybe with some beans, lentils, homemade baked falafel or….green chickpea pancakes instead? 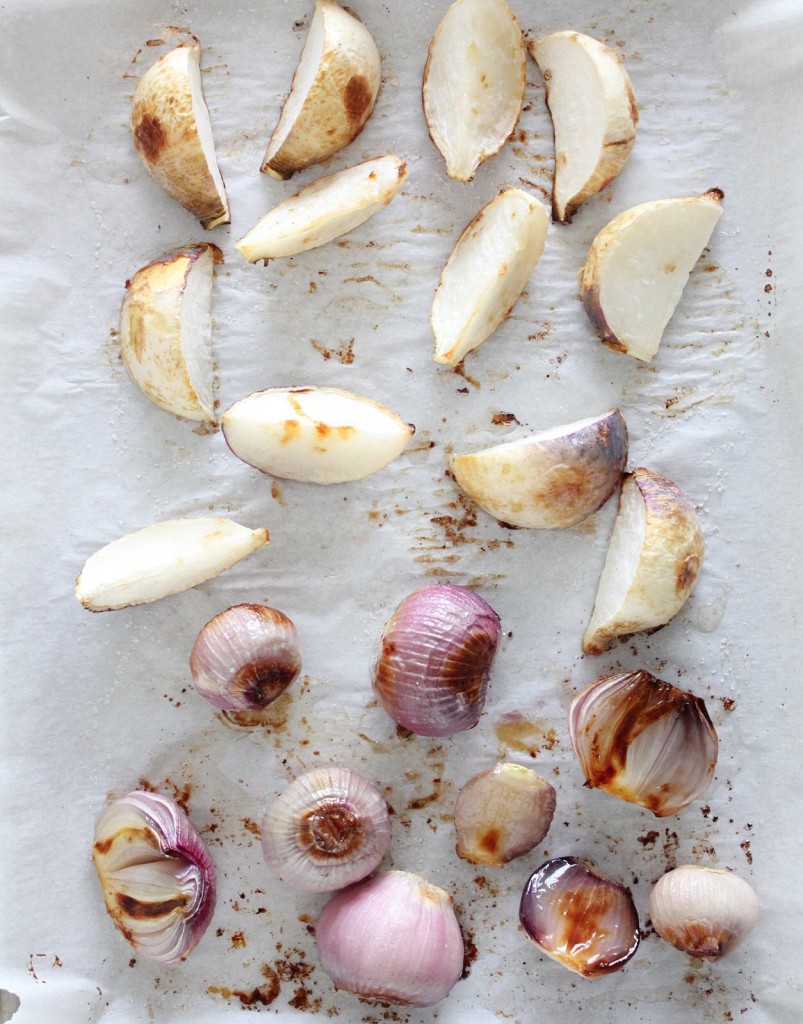 We made these pancakes the same way that we made these Asian ones, with a base of chickpea flour (or soaked, ground up chickpeas), and lots of veggies. The green comes from blending cilantro right into the batter, like you would in a green smoothie. Don’t like cilantro? (Despite its natural detoxifying powers to remove heavy metals from our systems?!) You can easily sub a different green –spinach will blend smoothly and not add much flavour, kale would be good if you cooked it right away (raw kale purée can get funky over time), parsley would taste good, or any of the above with a bit of fresh mint would be nice too. 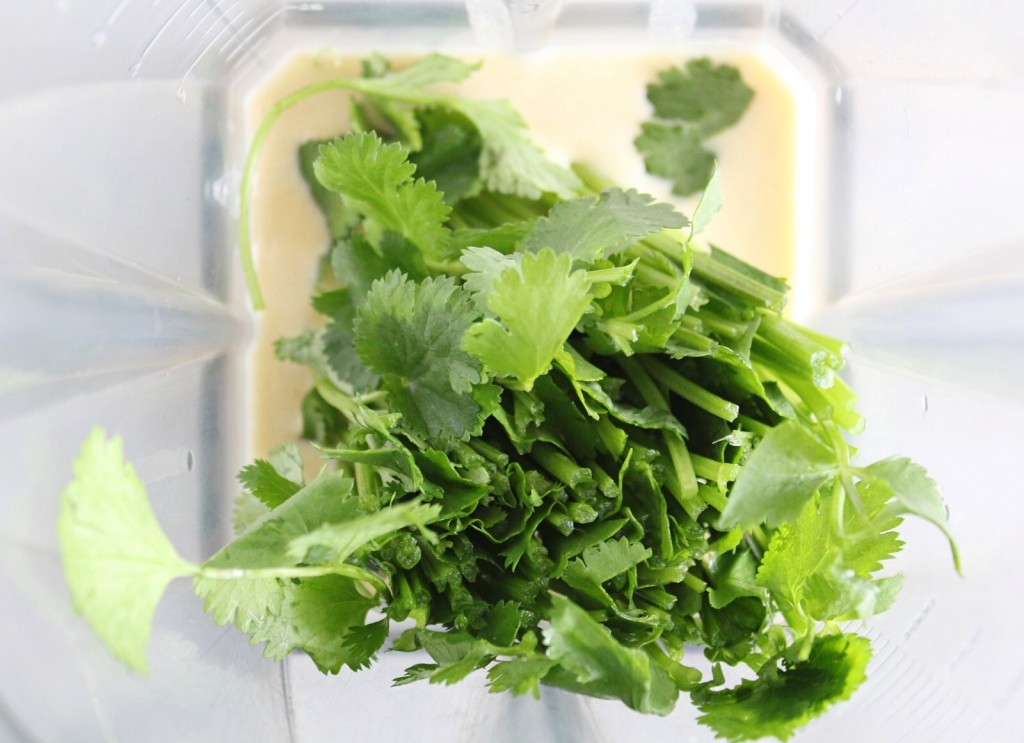 The tomato base is really simple, just tomatoes, onions, peppers and garlic. It sounds like I’m dragging you through Italy for the eight millionth time this year, but some toasty cumin seeds send us elsewhere, although I’m not clear where because Google can’t seem to decide. Israel maybe? North Africa? 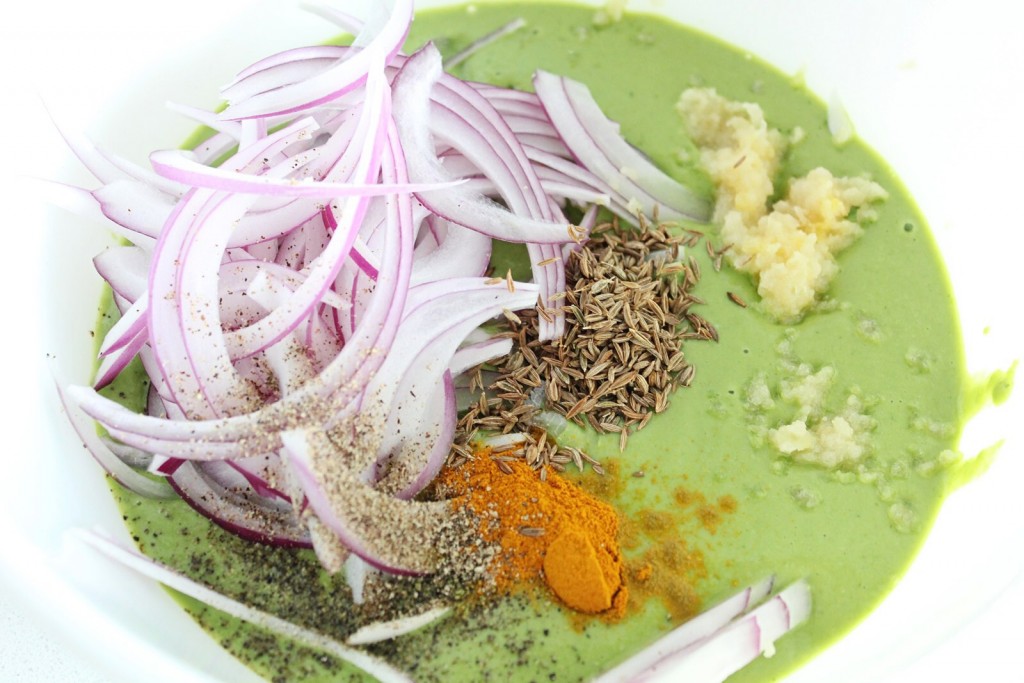 In our case, we’re not going to focus too much on its origin, because although we’re respecting it’s undeniably delicious roots, it is screaming things in my ears like ‘I hear you’re interested in cancer-fighting foods? Turmeric would be really good in here’ and ‘I don’t contain any cruciferous veg yet, but we’ve had our eye on some turnips’, also, ‘my sauce would work so well with plant-based protein! Every bean would taste good in here!’ 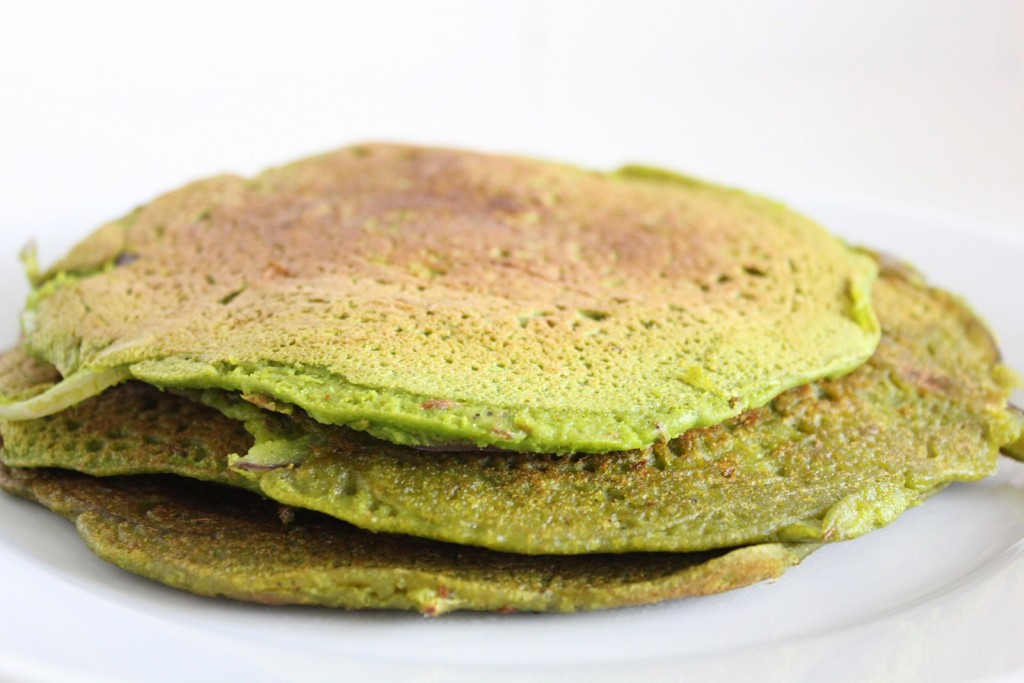 Literally every bean. You don’t have to make the fancy pancakes (you should at least once, you’re going to like them) but cooking some beans and adding them to the tomatoes and peppers takes less recipe-reading and planning, so it makes an easy alternative way to turn this into a hearty meal. 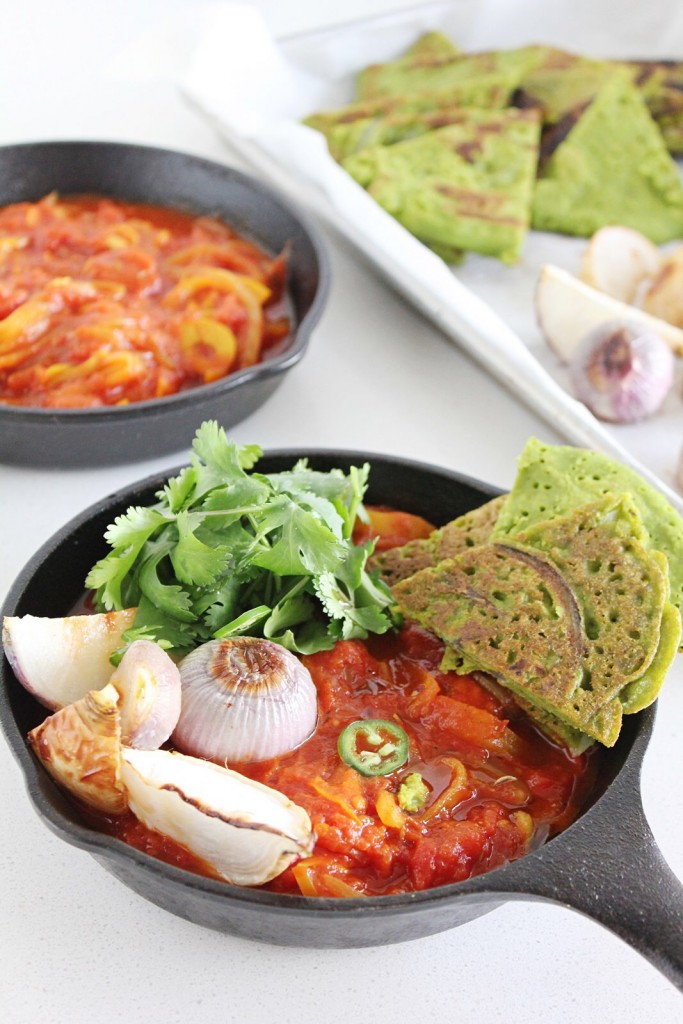 The sauce freezes exceptionally well (with or without beans) and is easy enough to re-heat and top with simple things that you already have on hand like avocado slices, chopped fresh herbs and green onions, this lemon-y massaged kale or even a dollop of classic or carrot hummus.