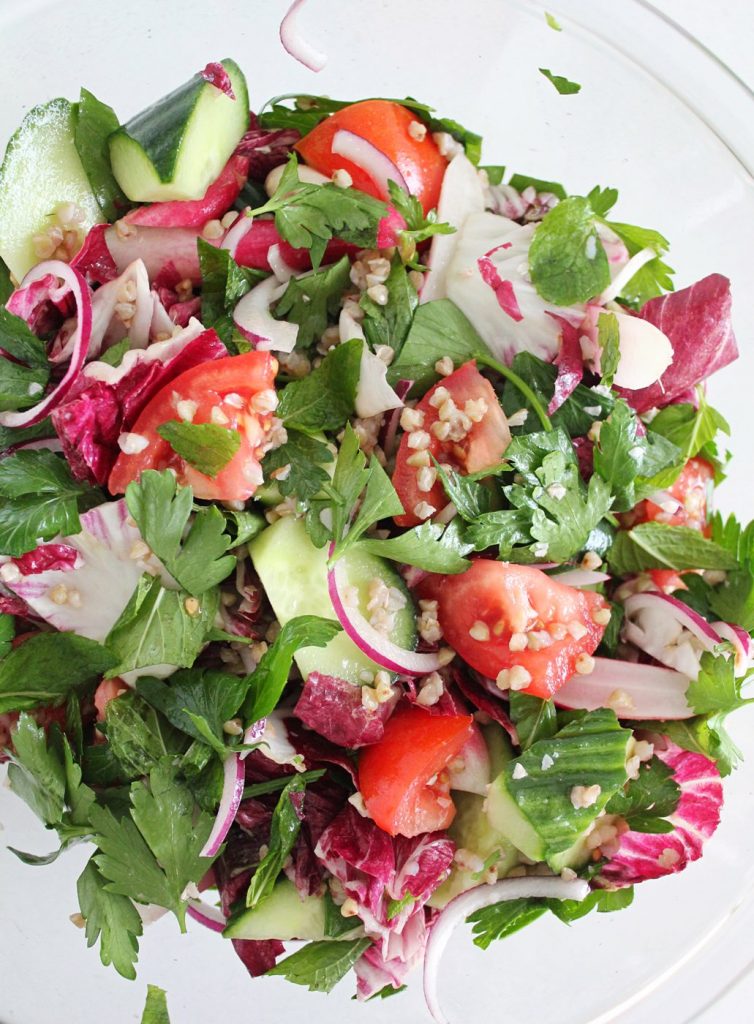 There is this little Lebanese restaurant near me that serves the best, clean, colourful delicious food. Every time we go, I feel inspired and tingly, surrounded by all of the lemon, parsley and tomatoes. 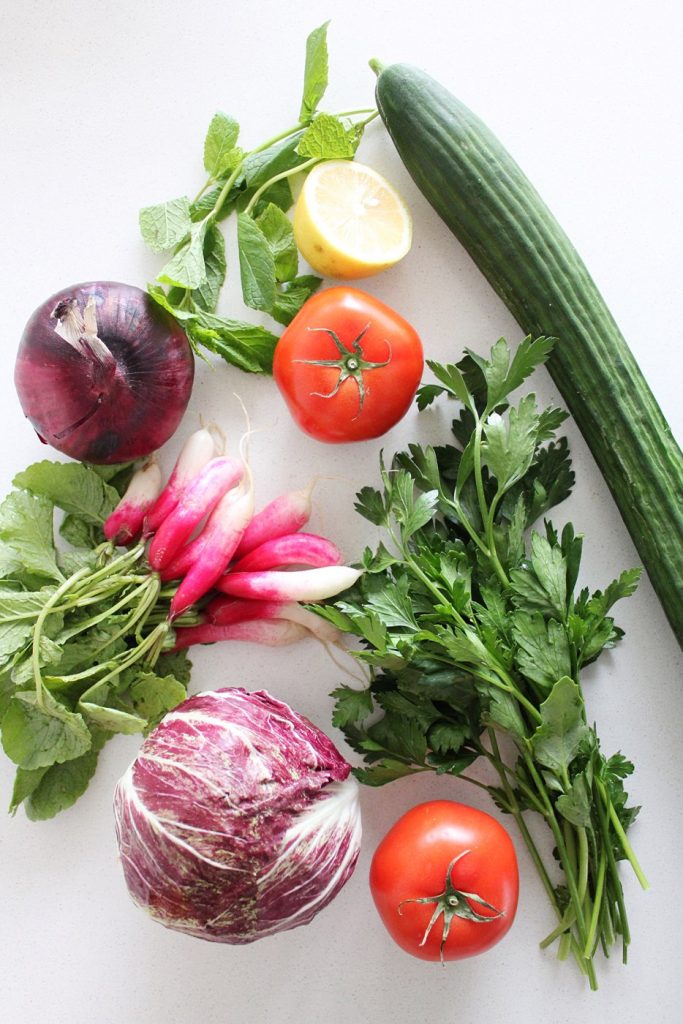 We tend to always order the same things to share, and one of those things is the fatoush salad. This is a simple Mediterranean salad, often with cucumber and tomatoes and the key ingredient is some kind of bread. Not little croutons, but perhaps day-old, big hunks of actual bread (or in this case pita) that absorb the excess salad dressing making the salad as satisfying as a big Italian sandwich. 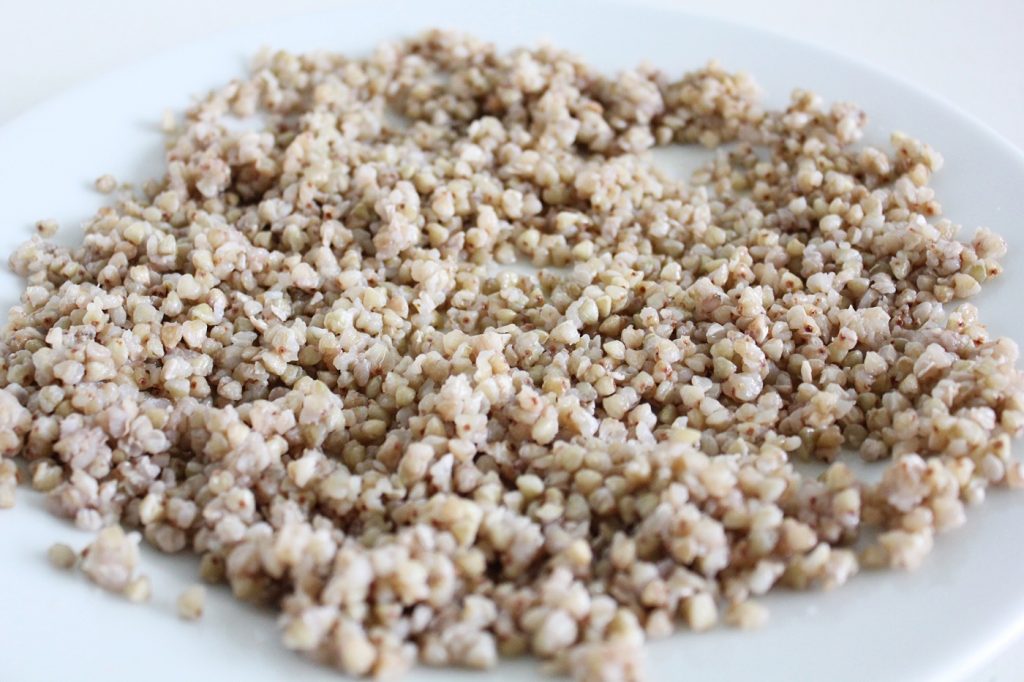 The problem is, we order it without the pita. Wes responds in some pretty un-romantic ways to gluten and I would rather save room for all of the lentils and hummus. It leaves the salad pretty boring, sort of like something that wanted to be a Greek salad, that just stopped trying halfway there. 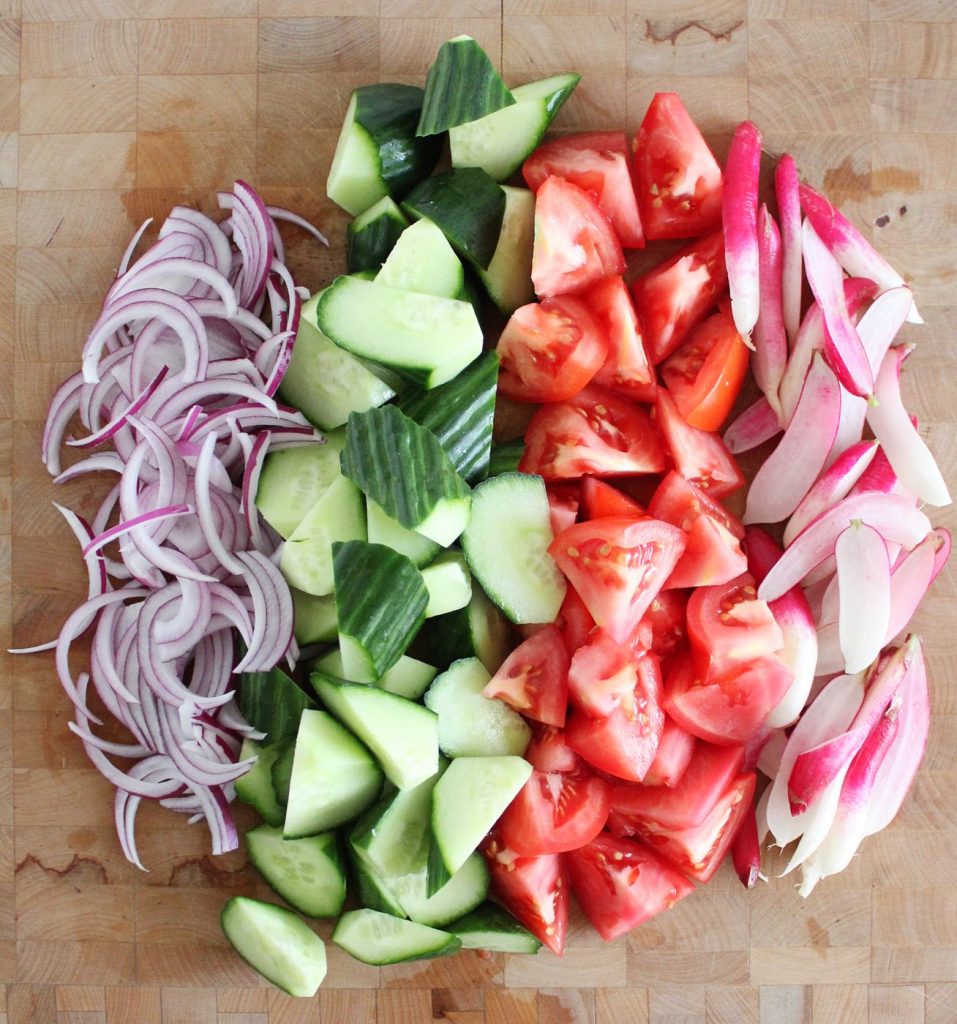 So, I was trying to figure out a healthy but simple way to capture the same fatoush vibe at home, without the bread, (even without g-free bread, which is still a refined carb, Italian sandwich, just mushier). But I still wanted it to taste like a meal and stick like a meal, the way a proper fatoush would. 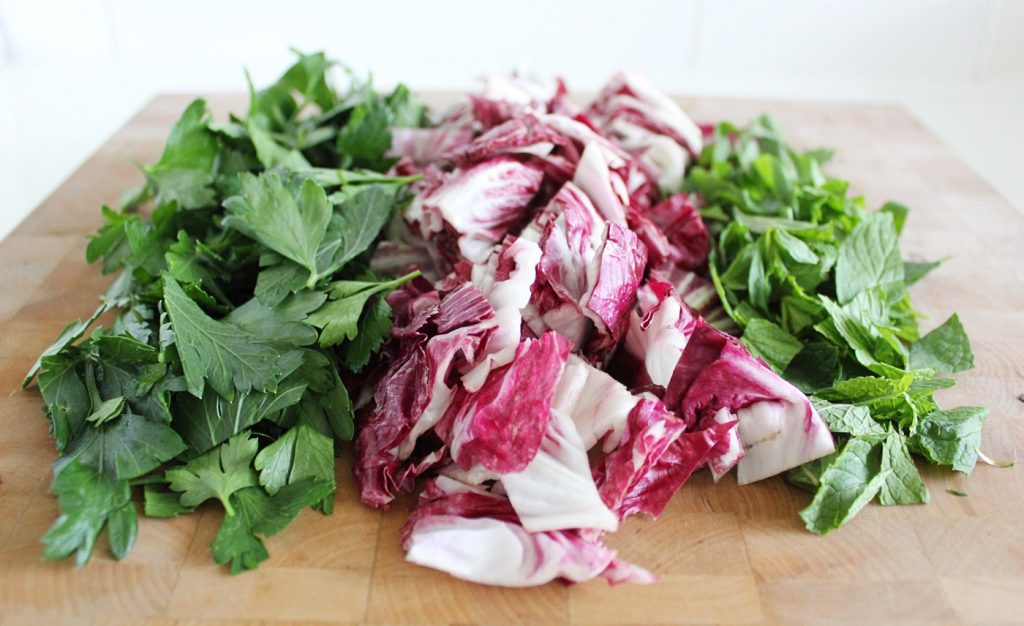 That’s where the buckwheat came in. It gives you a bready, sort of barley-like vibe minus the gluten, and unlike bread, has a very slow transit time, making it a good blood sugar stabilizer (very anti-cancer and something we could all use). It is also very high in protein, which means that this salad is suddenly a meal. 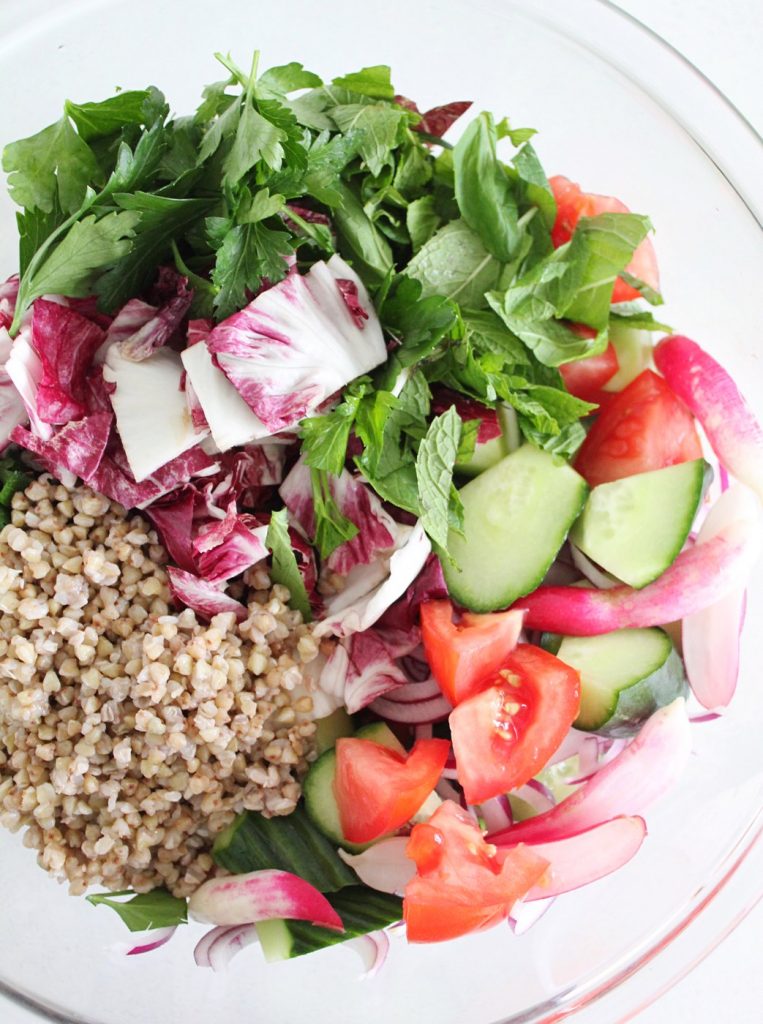 Soaking and rinsing the buckwheat doesn’t just mellow its earthy flavour, it also helps to remove the natural sliminess that comes out when it’s cooked. Don’t let this turn you off; literally rinse it away post soaking/pre-cooking and it will be fine, sort of like sticky rice. Kasha is the toasted version of buckwheat, and although the toasting process removes the slime factor, it also changes the flavour dramatically (not my fave) and kills the buckwheat (think buying your almonds already toasted vs. soaking them from raw). 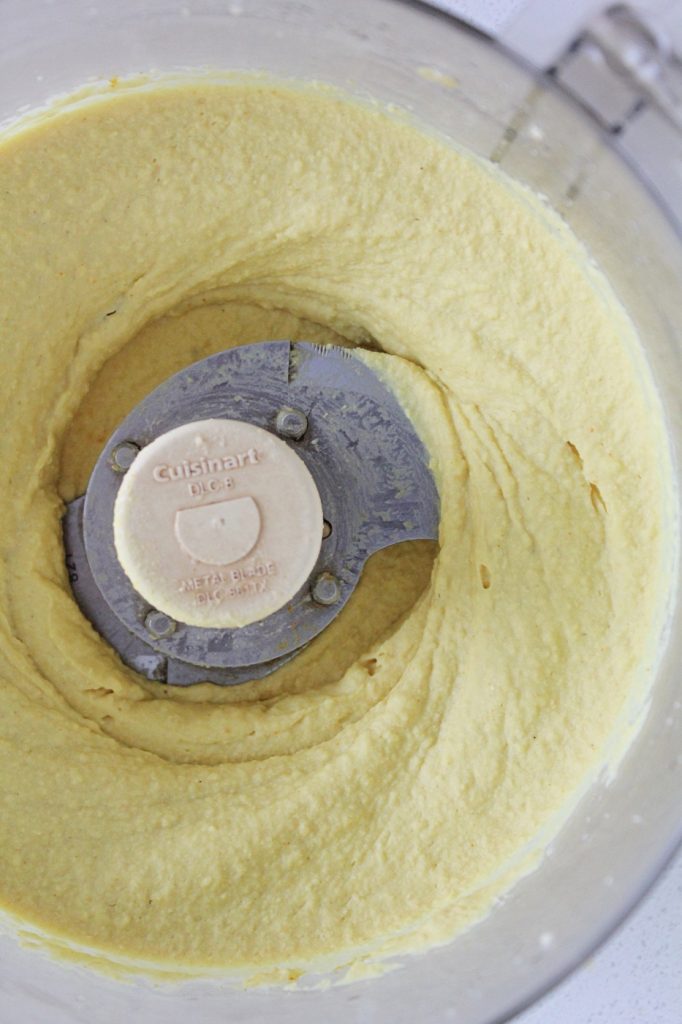 The radicchio replaces the lettuce because tomatoes, cucumbers and red onions are nice and sweet and can handle a bitter edge (plus your liver loves the bitterness). I also like the radicchio because it is hearty and tastes just as good (better?) in this salad on day two and three. Feel free to replace it with any lettuce that you have in your garden, fridge or at your grocery store, though. 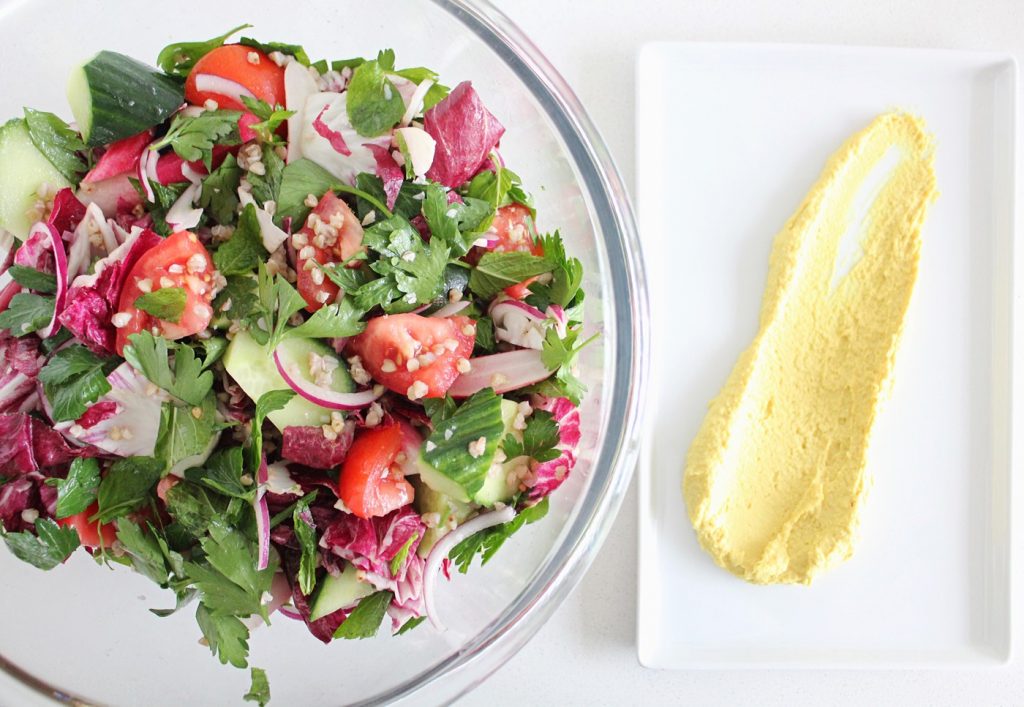 The grand finale, and not totally necessary but just so damn good, is the hummus. I often talk about the excitement of salad served on some hummus or bean purée, and this is a fine example of that. Seriously, who needs croutons? We’ve included the recipe below despite the fact that we have many hummus recipes on here that would work, because it is the same one that we get served with the boring pita-free fatoush that saves it from gigantic yawns. It’s tahini-heavy, rich and smooooooth. Plus some turmeric, because that’s what we do here. 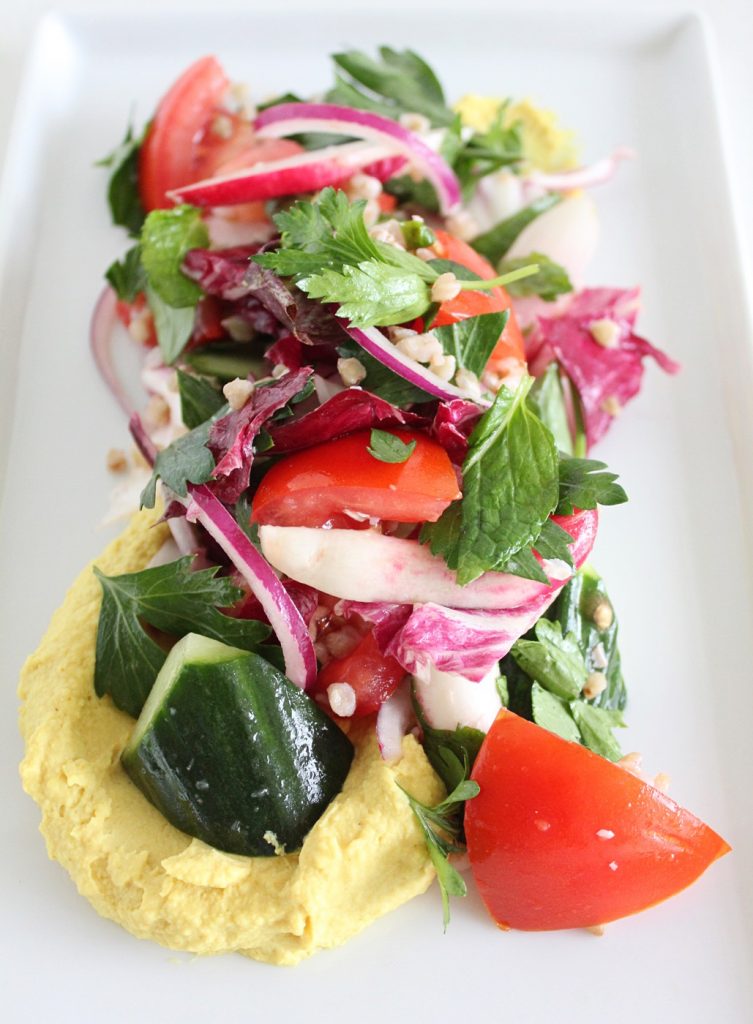