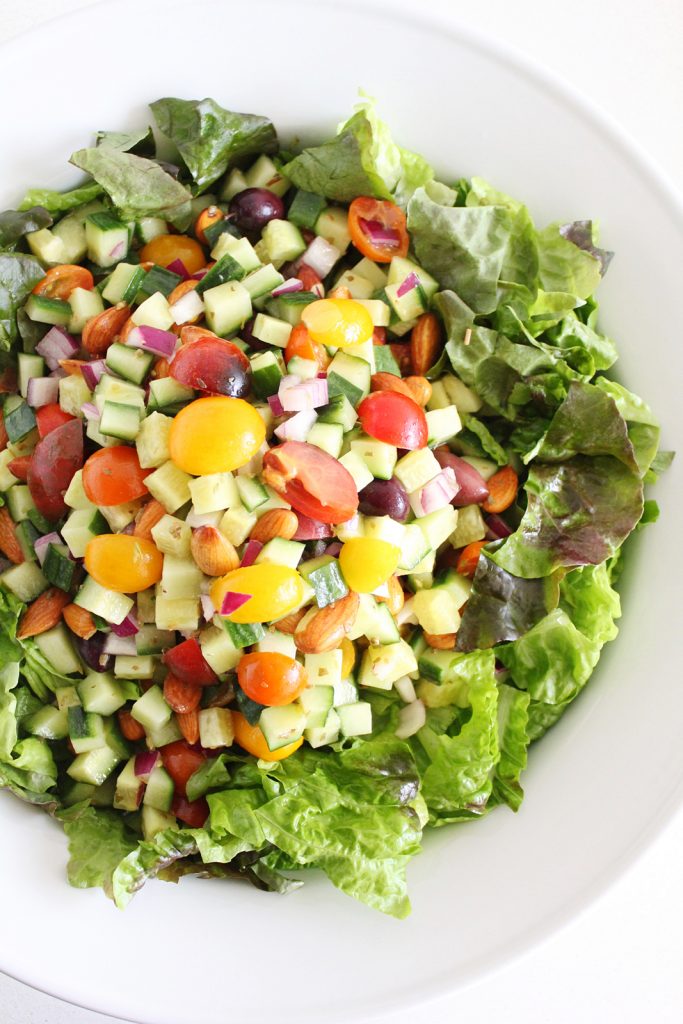 This salad is one of those recipes that really fills the hunger void, tastes like you spent time on it but actually requires very little time or effort. And it represents the new (or at least current) me. My almost 7-month-old is everything you could ask for in a baby, except for the fact that she is taking an extended sleeping hiatus. 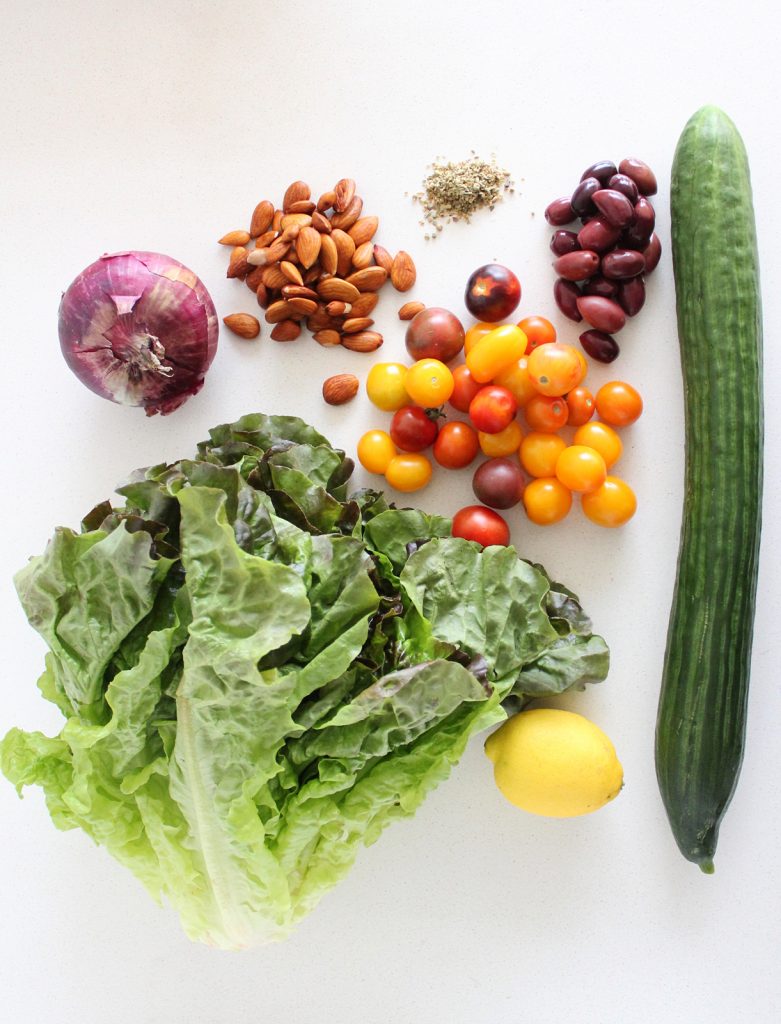 She is fine with it, not grumpy or eye-rubby (unlike myself who looks like a (suntanned) 175-year-dead zombie these days). But no matter how sleepy she is going down, every time I put her into her crib to sleep, day or night, she opens her eyes, smiles so big her face looks like it’s going to turn inside out and then she does the horizontal running man. It’s so cute, it makes me laugh every time, even though I’m crying (and very possibly sleeping) inside. 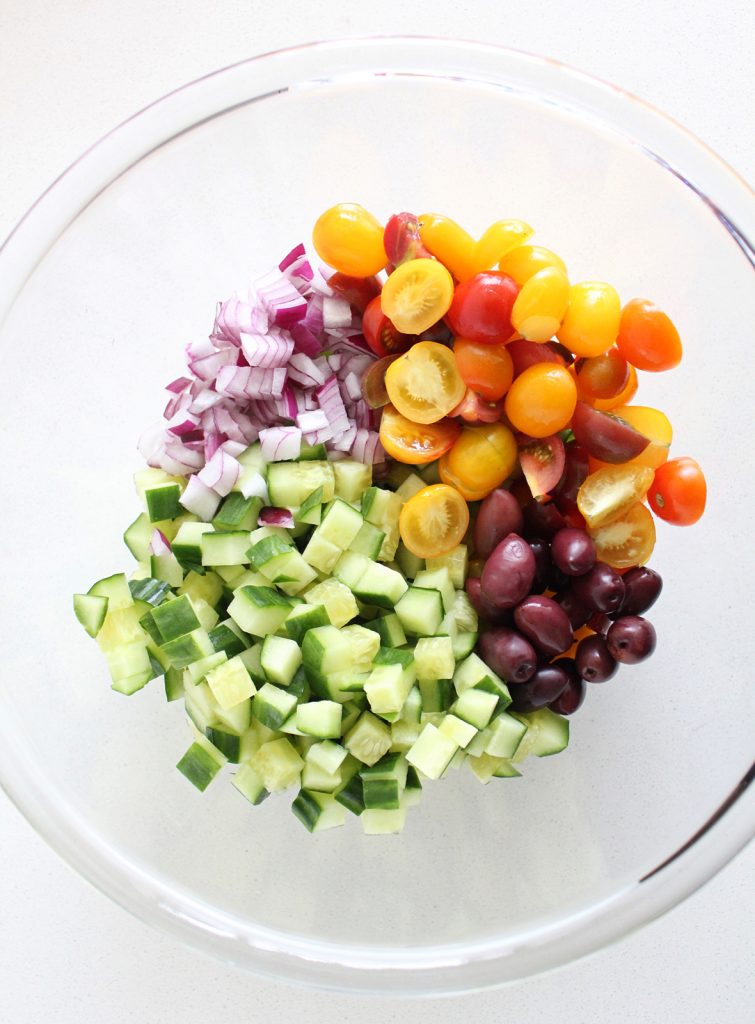 Needless to say, I have very little time to get things done these days, including making meals, so I have started making some very lazy dinners. This salad being one of them, which we had three different variations of last week. I’m happy to say, we’re still managing to eat healthy the majority of the time, and I know many of you also lack time and energy but still wish to eat well, so maybe this little non-sleeper is good for the blog (despite missing last week without any valid excuse beyond just not having enough time) (or sleep). 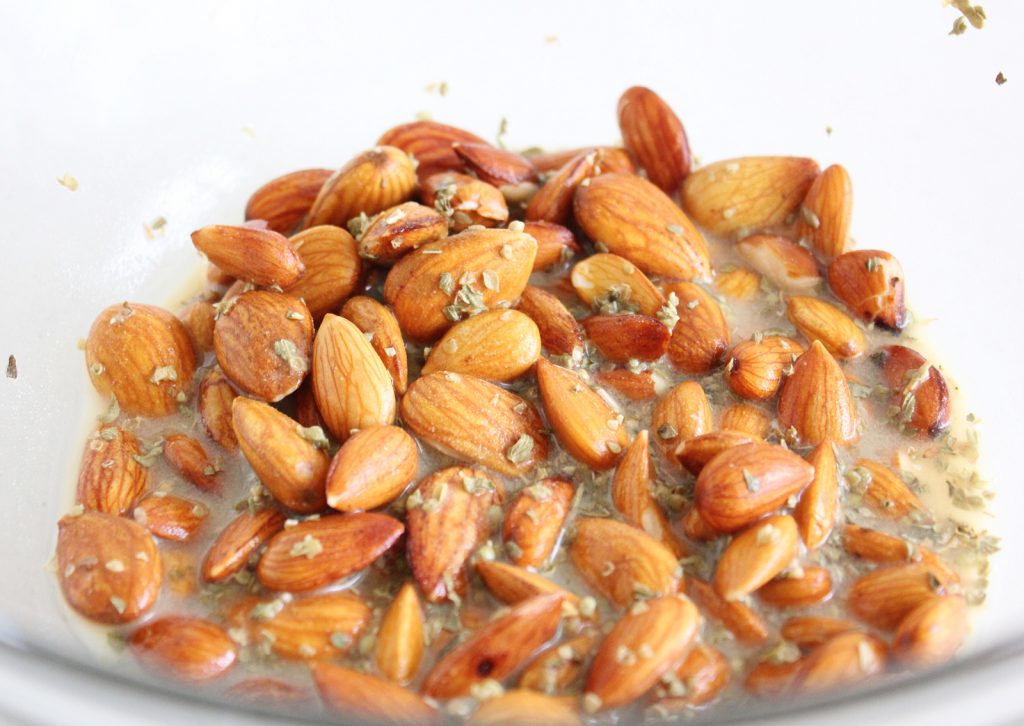 This is a play off of Greek salad. I love Greek salad, we ate a lot of it growing up and later when my sister and I worked in Greece for a summer (back when we were young and took sleep for granted), I fell even more in love with it. Because it is so simple, the key is good quality/tasting ingredients, so it is worth it to wait for tomato/cucumber season.

We are making this plant-based, obvs, so the thick slab of feta cheese on top is replaced with something that fills the fat void and is flavourful, easy to put together and full of bio-available calcium. I’m talking about almonds, but we have soaked them to release the enzyme inhibitor rinsed them off and then marinated them in our vinaigrette to help them absorb some Greek salad flavour. 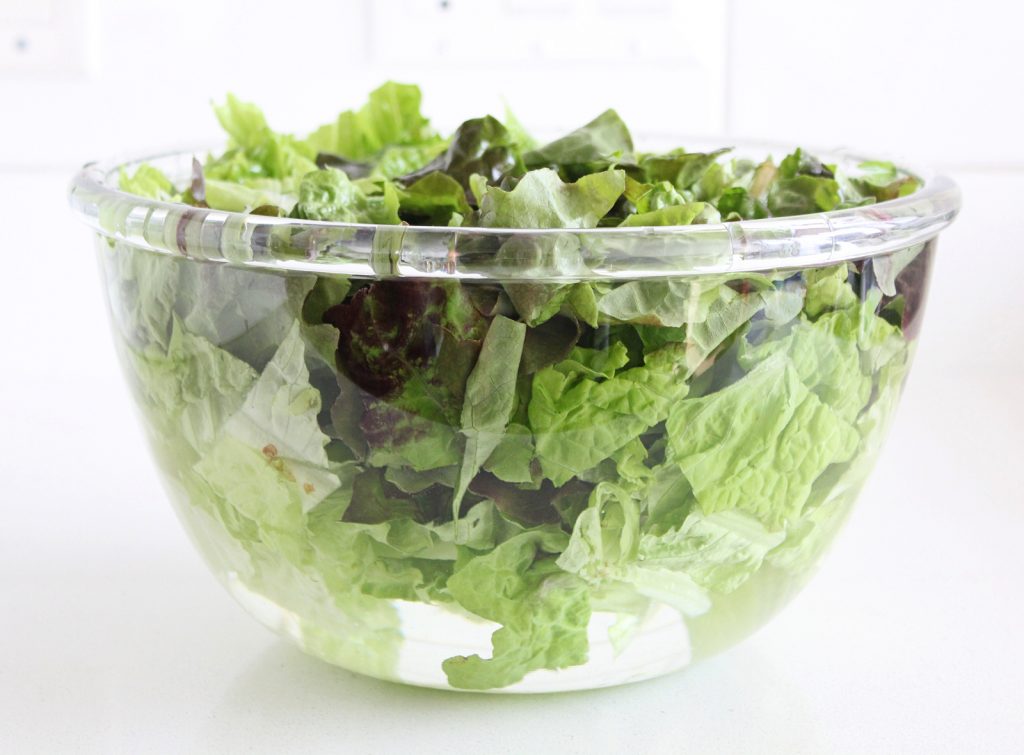 Wet/soggy nuts probably don’t seem like a fun salad addition when you first picture them in your mind’s palate, but if you don’t think of them as almonds, expecting a crunchy, toasty nut, you won’t be disappointed. They are totally different after the soaking/marinating, so expect more of a dull thud/ fatty legume. Think about cashews or peanuts in a stew or even any nut on day two of a salad and you’ll be managing the expectations of your palate properly. (If you have the energy to clean your food processor, you could also try this plant-based feta we did a while back) 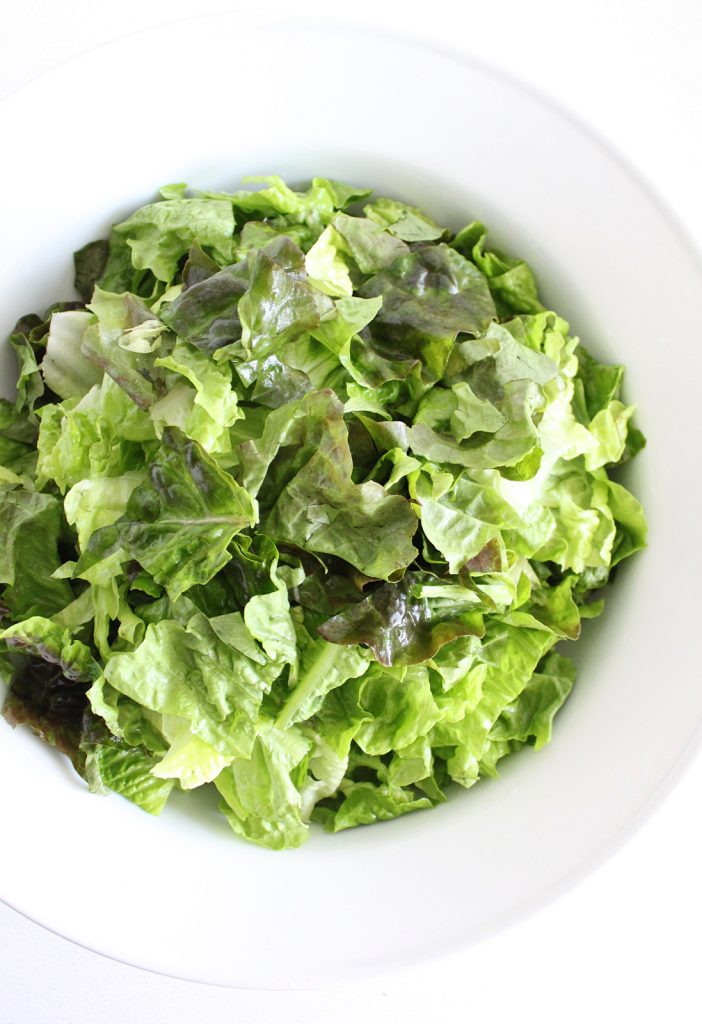 The only problem I see with Greek salad is not a problem if you have a nice crusty loaf of bread (or pita) to sop up all of the dressing. Nothing in the salad really has grooves to catch the dressing. Not only that, but those juicy veggies release their own juices after spending some time in the vinaigrette, so what is left is a bowl of flavourful vinegary liquid on your plate. So now I’m the person that says instead of bread, we use lettuce! 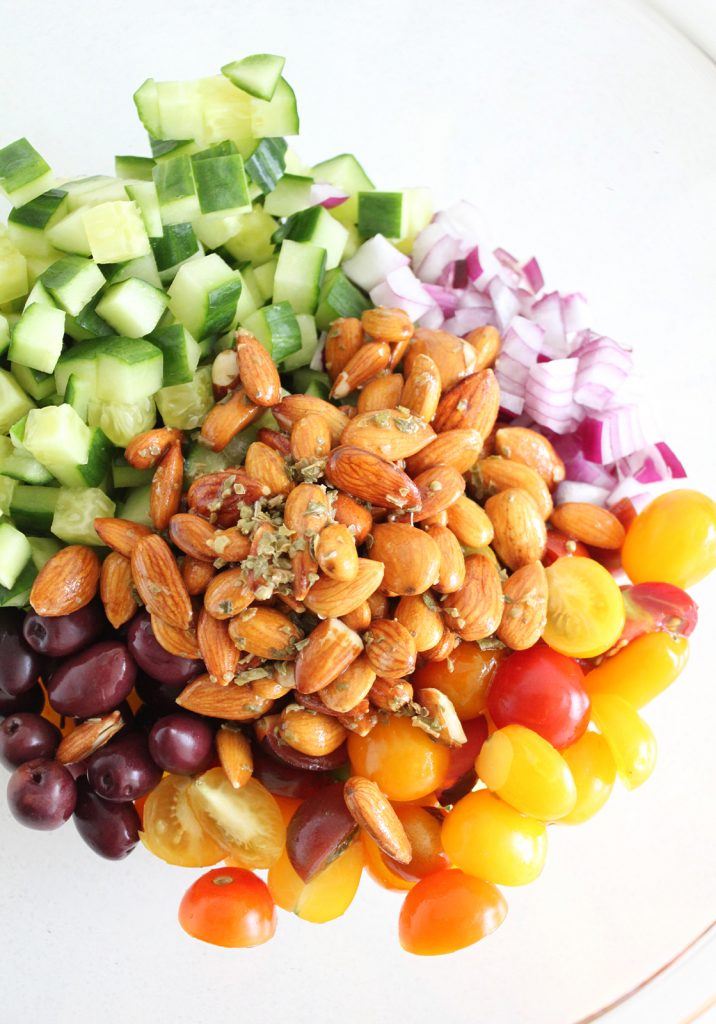 I know, not the same, if you really want something pita-ish, make some of this, but hear me out with the lettuce. We toss all of the vegetables/almonds/olives in the dressing. They get to know each other, becoming more flavourful and juicy and then pour all of that over the washed and dried lettuce that we have spread out on a platter or wide bowl. You don’t even have to toss it. I like the contrast of saturated leaves and fresh, untouched leaves. 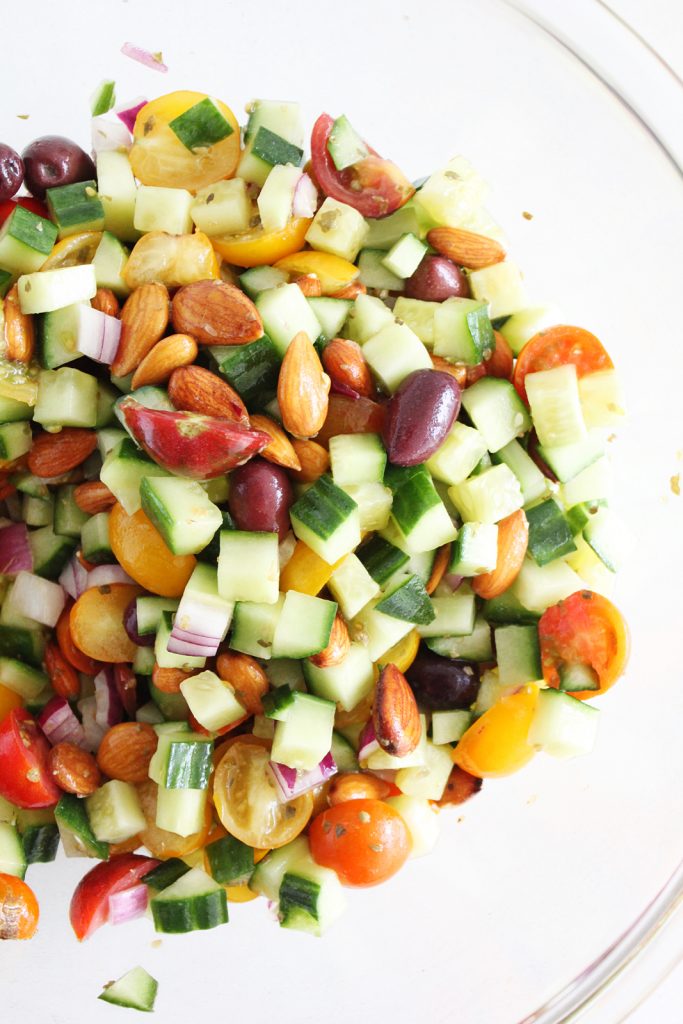 We used a leaf lettuce, which is a bit more curly and born to catch flavours just like the ridges on gnocchi or broccoli afros. A curly kale would work well too, but the flavour of the lettuce lends well to the overall Greek salad feel that we’re going for here.

It probably doesn’t need to be pointed out, but by adding the lettuce, we have also added a leafy green and all of the nutrients that come with it. Bonus points for using a red leaf lettuce, which boasts more antioxidants than a green leaf lettuce as displayed by its deeper pigment. 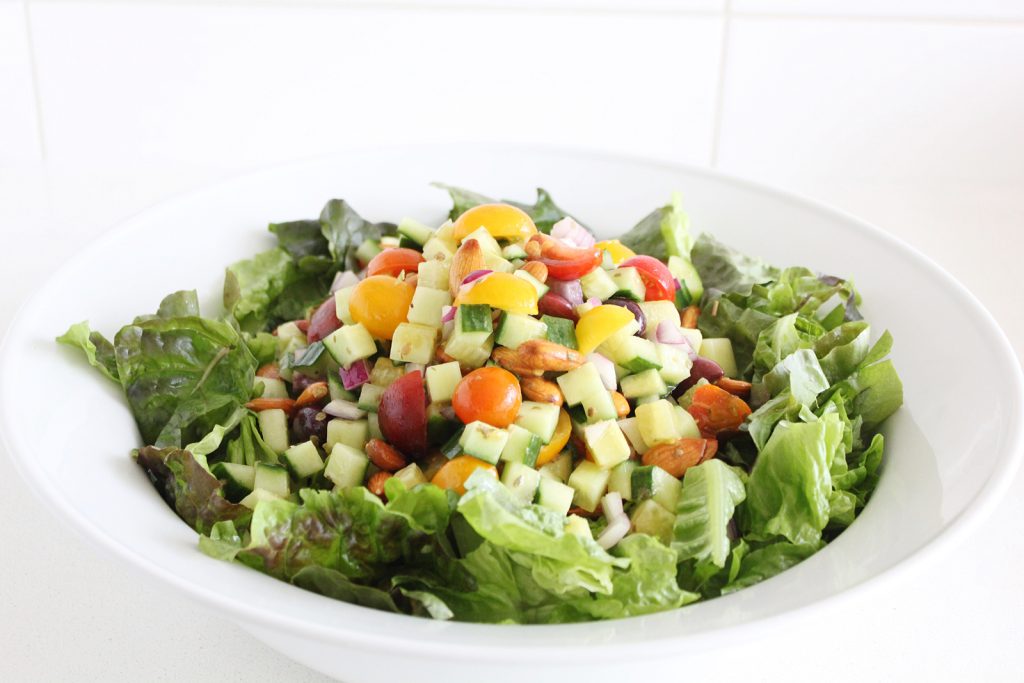 This salad is delicious as is, but the variations of it that I made last week (to disguise the fact that we were having the same thing for dinner every other night) were:

Massaged kale instead of lettuce
Roasted chickpeas instead of almonds and the addition of lots of mint and cilantro
Cooked buckwheat, tomatoes, avocado, green onions, fresh mint and basil instead of all of the veg on top