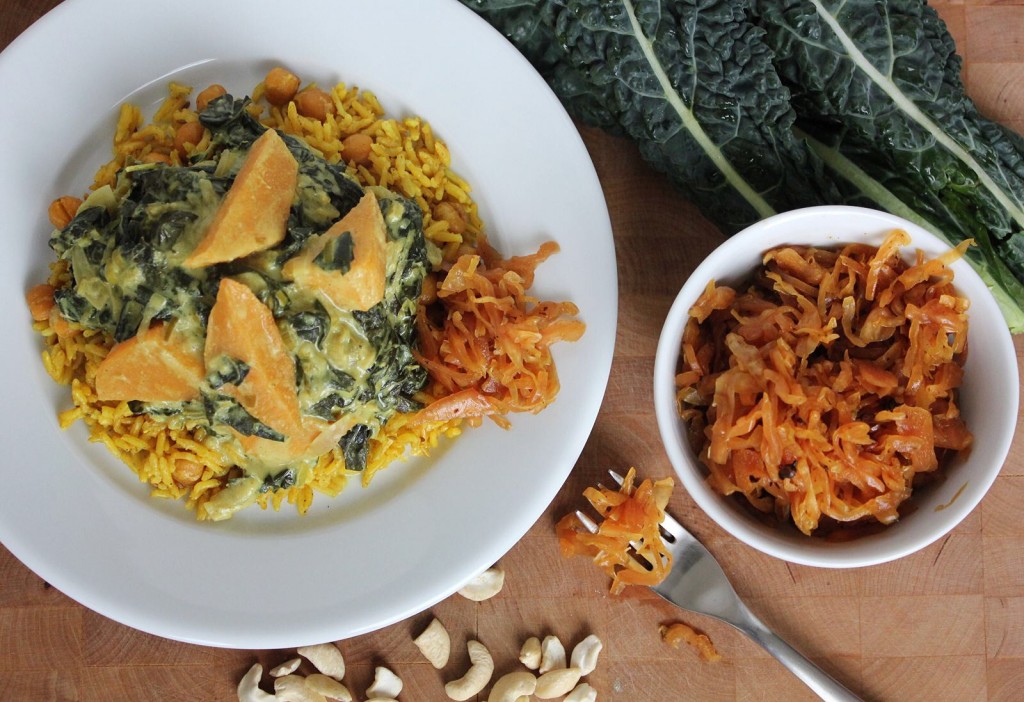 This week’s recipe stems from putting my foot down last week. Has anyone seen the Planet of the Apes 1? Pretty creepy, right? Did anyone’s spouse try to talk them into seeing the second one (in theatre, no less!)? Well, mine did. He will see any movie marketed towards males, which means that I wind up seeing a lot of them too. Growing up in a house full of girls, I hadn’t seen most shoot’em ups until I was more than old enough to know it was all pretend. Don’t worry though, thanks to my husband, I have been making up for lost time, and have now seen almost every worthwhile (and not so worthwhile) gun-infused/sci-fi weirdness movie spanning the last several decades, and am so much smarter for it ☺ 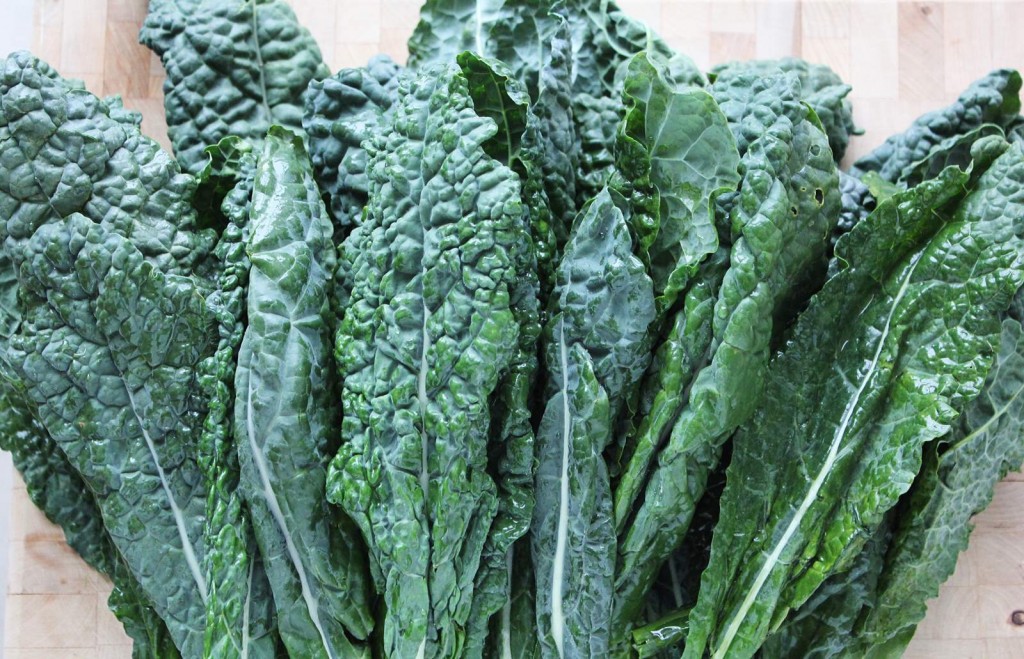 I read the book The Hundred-Foot Journey a few years ago and was excited when I heard they were going to turn it into a movie (it is all about cooking and food and is sooo visual!). After somehow manipulating my husband into seeing this instead of the talking, giant apes taking over the world part 2, we sat through 122 minutes of mouth watering French and Indian food, coming alive on screen. I’m still drooling just thinking about it. Somehow, we both enjoyed it immensely and were inspired to throw our previous dinner plans out the window and go to our favourite casual Indian restaurant for dinner. And cook Indian-style food for the rest of the week… 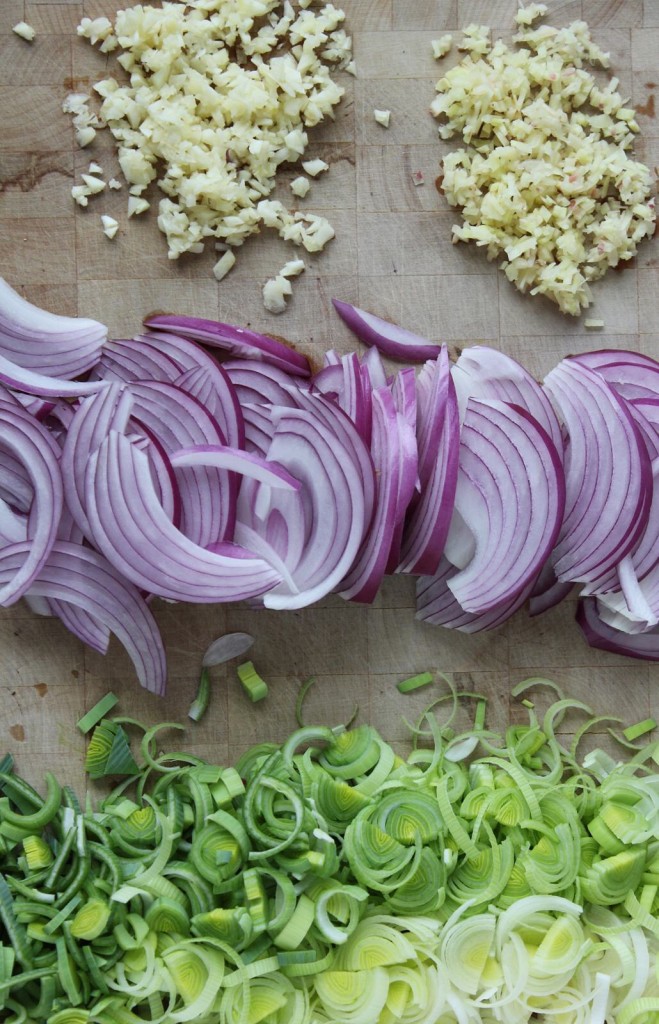 Let me start by saying that this dish is not classically Indian (nor am I, not even a little bit), only inspired by one of my favourite Indian dishes – Saag Aloo (or Paneer). Classically, it is made with spinach, cream, ghee, spices, aromatics, and paneer cheese or potatoes. Besides the Indian spices, it sounds pretty French, doesn’t it? My version is a little cleaner (no frying or browning, no dairy, some extra veg), and although still delicious, it is twisted around until it becomes a dish unto itself. Not classic Indian food but smooth, warm, rich, flavourful, nutrient-dense food to cozy up with while watching the movie of your choice.

I chose kale over spinach for its body (if we’re being honest) and because it is kale, the crushing cancer poster green. Feel free to take the classic route and sub in spinach, or Swiss chard, or a blend of what may be growing in your garden. Lots and lots of greens is the ticket here. 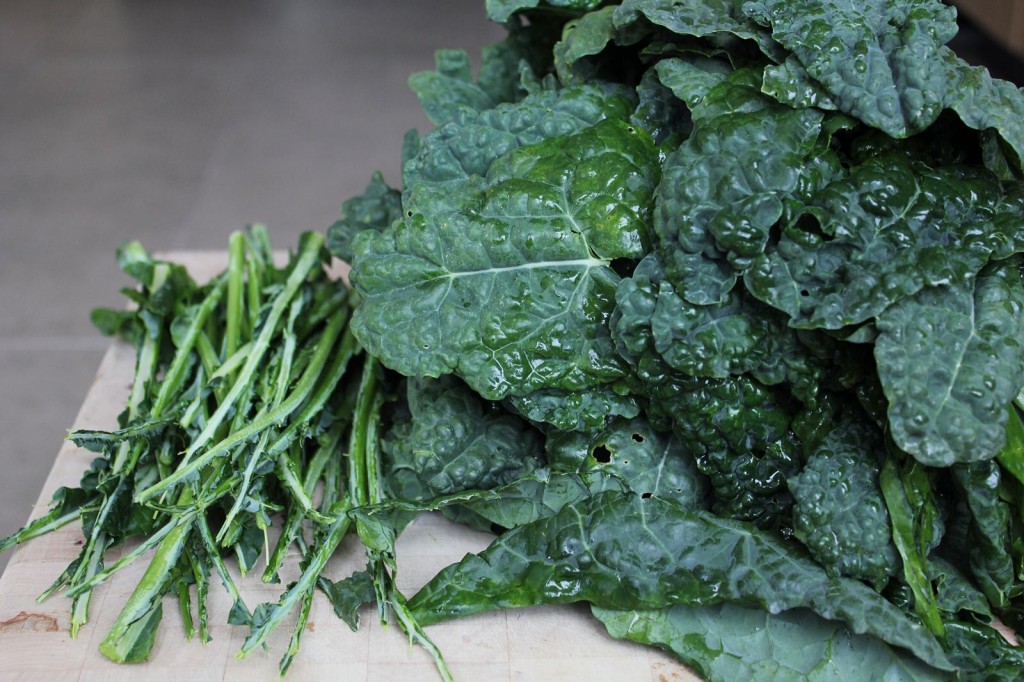 The cream replacement is a cream made from shredded coconut and soaked cashews, buzzed up in a high power blender. If your blender isn’t a beast, soak the coconut too (separately from the cashews) to soften, and blend for several minutes and then strain through a fine-mesh sieve. It creates a rich, buttery creaminess that has some sweetness from the coconut, and is a more than passable replacement for cream in this dish (minus the inflammation and excessive phosphorous). 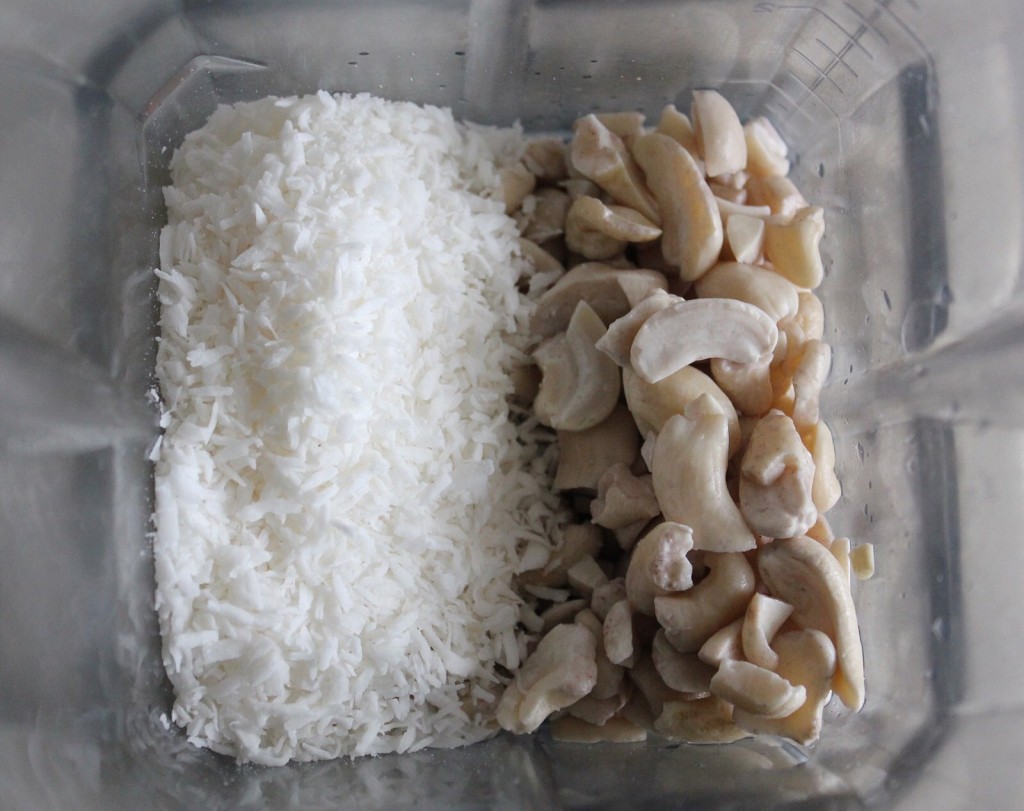 Any root veg works well as a paneer/aloo replacement. Parsnips are sweet and distinct, sunchokes are closer to potatoes, and sweet potatoes are a great option too. If you’re using potato-potatoes (aloo) as a treat, leave their skin on. I have used rutabaga in this recipe, because I like the texture, and also because it is from the famous cancer-fighting mafia family, cruciferous. You can steam or roast it ahead of time and add it at the end if its mustardy-ness is a little much for your taste buds, or add it at the beginning, as I do in this recipe, so that it absorbs flavours (and exudes its own flavour) as it all cooks together. 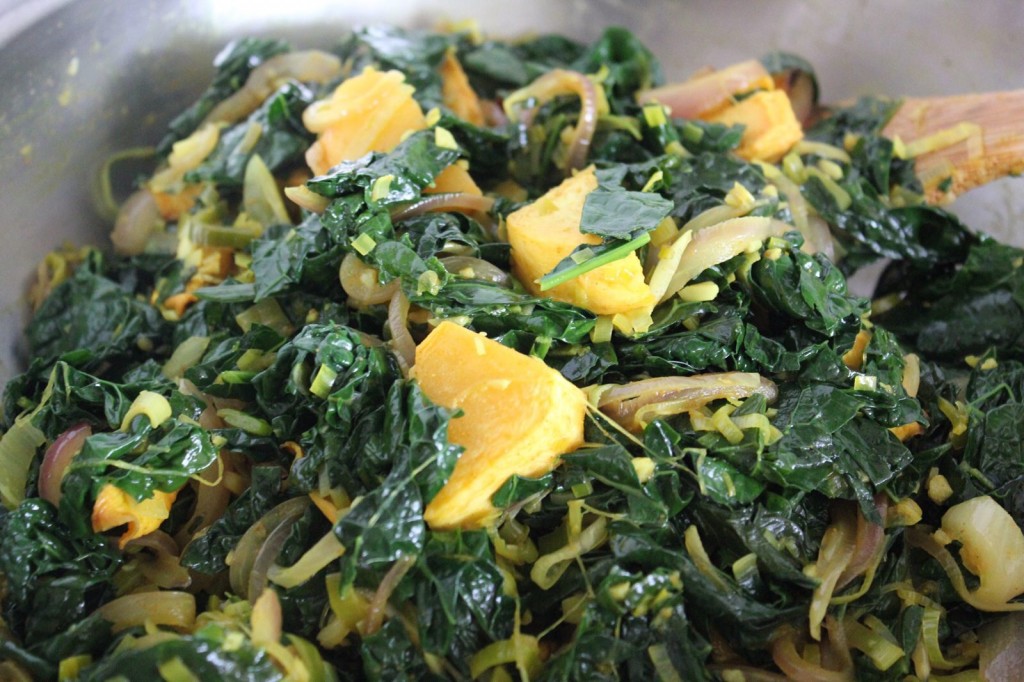 Like most Indian food, this dish is full of anti-inflammatory spices and aromatics. For optimum digestion, serve with some homemade sauerkraut or other fermented veggies. This will add a nice contrast to the richness of the dish, in the way that classically, an Indian pickle would. If you are still waiting for your veggies to reach their fermentation peak, the fresh squeezed lemon juice at the end instead will add the flavour balance (and vitamin C). 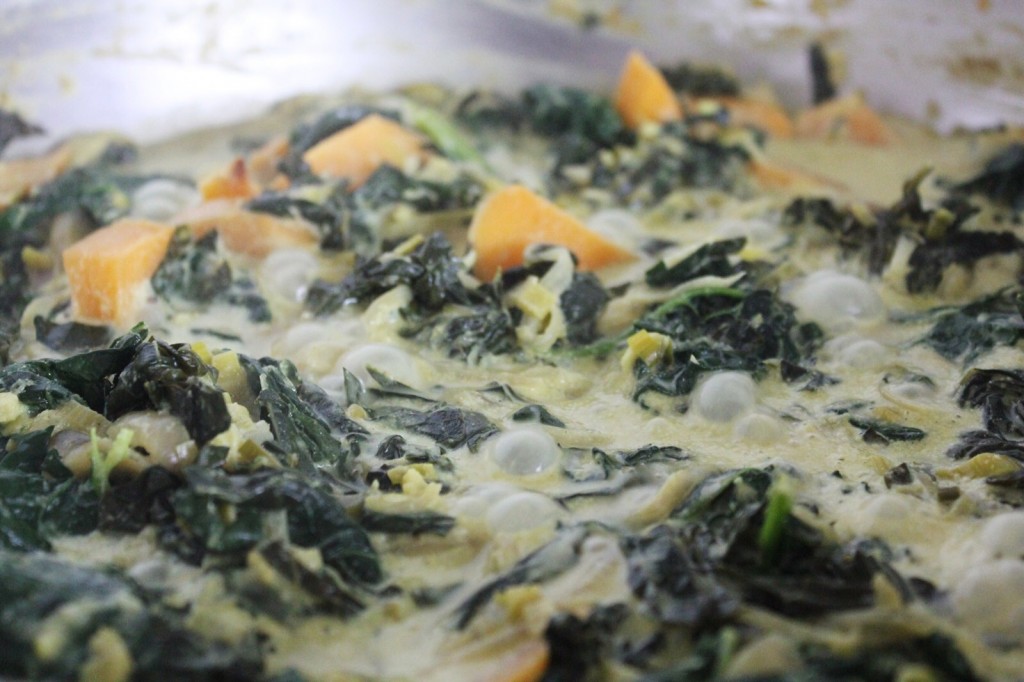 The idea is that the kale and veggies all cook down and lose some of their stiffer texture until all of the ingredients melt together smoothly. This requires a low heat and the addition of ½ c of water here and there, as it dries up or starts sticking. If you keep the lid on, there will be less evaporation, which helps, but beyond that, you’ll just have to add water from time to time, as it cooks, until you get the ideal texture (30 minutes or so). 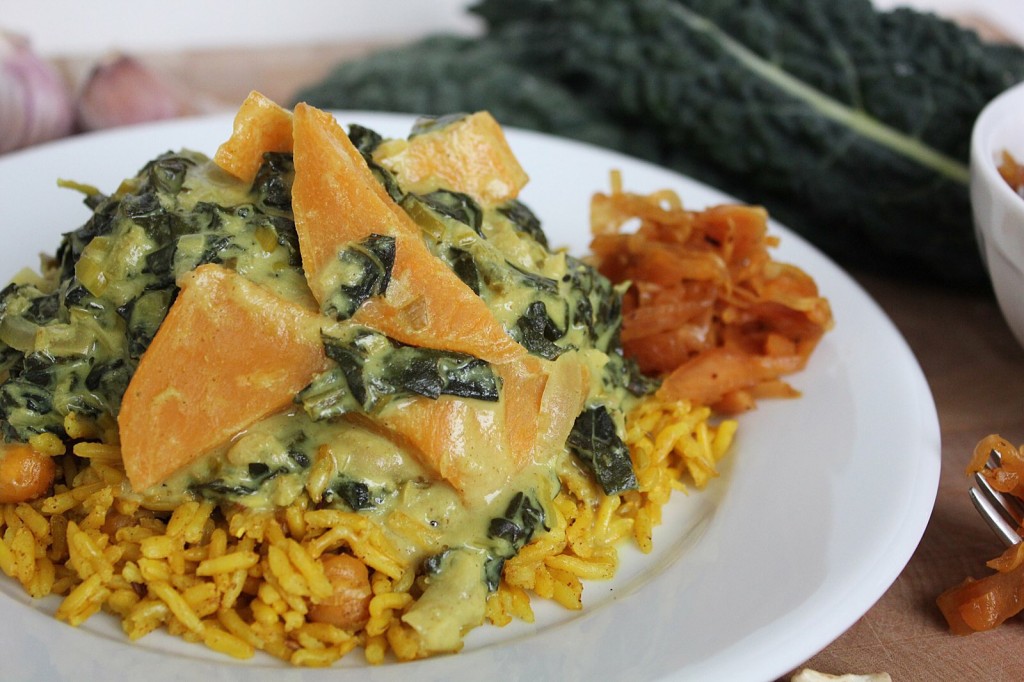 And if you are like my husband and require a few car chases and explosions in your meals too, you may want to chop up a serrano chili or two (or three…), and sauté it in the beginning with the rest of the veg.